Is 'Officer’s Bill of Rights' Holding Up Baltimore Death Investigation? 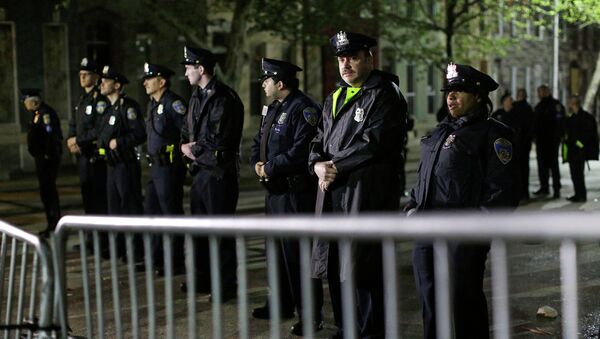 © AP Photo / Patrick Semansky
Subscribe
In the murky aftermath of the death of Freddie Gray after he was detained by Baltimore police, locals are frustrated by the lack of information, and questioning the role of the Maryland Police Officer's Bill Of Rights - which gives officers up to 10 days to find a lawyer, during which time they don't have to talk to any of their superiors.

Since the April 12 encounter with police which mysteriously left Gray with injuries he would die from a week later, Baltimore residents have been outraged — protesting again Wednesday — at the lack of answers from city and police officials.

The mayor herself, Stephanie Rawlings-Blake, said at a news conference Monday that she was angry at the situation and frustrated as well.

At one point Rawlings-Blake blamed the Law Enforcement Officer's Bill of Rights for delays in getting interviews from all six officers involved and under investigation in the incident, reported the Baltimore Sun.

And several online news outlets have reported that an officer doesn't have to speak to anyone for 10 days after an incident, and that their superiors are prohibited from speaking to them.

"They've had 10 whole days to watch the news, to watch the cell phone videos of their arrest of Freddie, to study what witnesses say they did or did not see," the Daily Kos comments.

The actual text from the LEOBR of Maryland on the "Right to Counsel" is as follows:

(ii) The law enforcement officer may waive the right described in subparagraph (i) of this paragraph.

(2) (i) The interrogation shall be suspended for a period not exceeding 10 days until representation is obtained.

(ii) Within that 10-day period, the chief for good cause shown may extend the period for obtaining representation.

"Police officers, like any other individual or citizen who is being investigated for a criminal act, have a constitutional right not to speak to the police, " Michael E. Davey, an attorney for the police union, told the Baltimore Sun regarding the mayor's remarks.

"At no point when you're hired by a police department do you sign a waiver saying you've given up your constitutional rights," he said.

And while it is true that everyone, police or not, has the right to an attorney before being interrogated in a criminal investigation, it is also true that civilians who failed to cooperate would likely be kept locked up in police custody until their lawyer arrived.

In the meantime, the six officers involved have been suspended with pay, but so far as has been reported, no restrictions have been placed on their movements or interactions.

Groups like the American Civil Liberties Union have spoken out in the past against the 10-day period given to officers, and some believe it could facilitate the coordination of cover-ups of police misconduct.

"Not only are officers entitled to an attorney, union attorneys are usually available to them immediately," Susan Goering, executive director of the ACLU of Maryland, wrote in a letter to the Baltimore Sun in January.

"There is no need for an additional waiting period. Ten days simply impedes investigation and significantly delays the ability of police departments to communicate effectively with the public about what happened."

Dayvon Love, the director of public policy for Leaders of a Beautiful Struggle (LBS), told Vice News that he sees an even more sinister motivation in the 10-day period.

"It gives law enforcement time to hide certain information and construct a story that is palatable to the public and allow them to preserve people's jobs and so on," Love said.

So far, five of the six officers under investigation have voluntarily given statements. There has been no explanation given for the reluctance of the sixth.