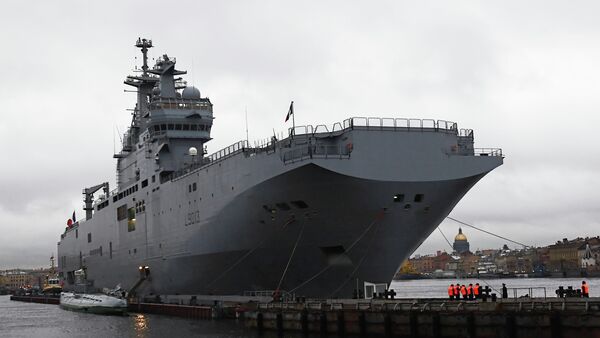 © Sputnik / Alexei Danichev
/
Go to the mediabank
Subscribe
International
India
Africa
The topic of the Mistral may be brought up during the meeting Russian President Vladimir Putin and French President Francois Hollande in Yerevan, according to Russian presidential aide Yuri Ushakov.

Putin, Hollande to Meet in Yerevan to Discuss Fulfillment of Minsk Accord
MOSCOW (Sputnik) – Russian President Vladimir Putin and French President Francois Hollande may discuss the topic of the Mistral-class helicopter carrier contract during a meeting in the Armenian capital of Yerevan at the end of the week, Russian presidential aide Yuri Ushakov said Wednesday.

On Monday, Kremlin spokesman Dmitry Peskov said Putin and Hollande could discuss the delivery of the Mistral-class helicopter carriers in Yerevan if the latter raises the issue.

Hollande Free to Raise Mistral Delivery Issues With Putin in Armenia
On Thursday, the Russian President said France’s refusal to fulfill its contract to supply Mistral-class helicopter carriers to Russia has no impact on the country's defense capabilities.

According to the terms of Russia's $1.5-billion Mistral delivery contract with France, signed in 2011, Paris was due to deliver the first of the two Mistral-class ships, the Vladivostok, to the Russian Navy by November 14, 2014.

Moscow has repeatedly denied any involvement in Ukraine's internal conflict, warning that it could file a lawsuit against Paris if contractual obligations for the Mistral deal remain unfulfilled.