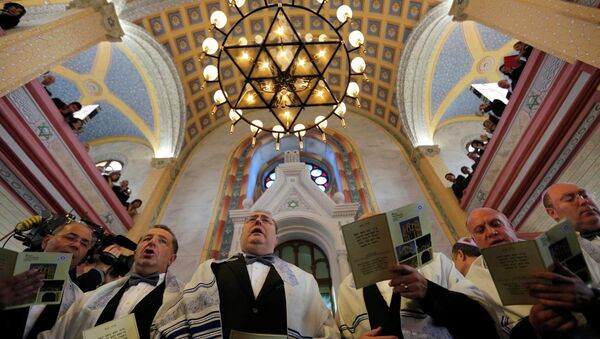 With anti-Semitism on the rise in Europe, Amnesty International may be facing charges of anti-Semitism, itself. The human rights group has taken heat for refusing to investigate the increase in violent attacks against the Jewish community, despite commissioning a full report on Islamophobia.

In March, 20 individuals forced their way into a London synagogue. Shouting offensive slogans and death threats, the attackers smashed windows, broke doors, and injured one congregant. The attack occurred only a few days before a planned march by far-right groups, aimed against "the complete Jewification of the borough."

That march has been postponed until May 2, according to extreme nationalist websites.

And these are only two examples of the recent wave of anti-Semitism which seems to be spreading through much of Europe. The rise has caused alarm among many, and during the annual Amnesty International conference, a motion was filed to address those concerns.

Put forward by Andrew Thorpe-Apps, the motion was defeated by a vote of 468 to 461 on Sunday. It was the only proposal voted down during the conference.

"I recently joined and I believe passionately about human rights," Thorpe-Apps told the Jewish Chronicle. "I’m not Jewish myself but I’ve been appalled by what I’ve seen in the press facing the Jewish community and an organization like Amnesty should really add their voice to that as they do with other human rights issues."

"After a really interesting debate where everyone condemned discrimination against all ethnic and religious groups, our membership decided not to pass this resolution calling for a campaign with a single focus," he said. "Amnesty International fights against discrimination in all its forms, and will continue to do so."

Fair enough. But despite Durkin’s claim that Amnesty prefers to cast a broad humanitarian net rather than zero in on individual concerns, this argument would seem to be disproven by a report conducted in 2012 entitled "Choice and Prejudice: Discrimination Against Muslims in Europe."

That report is summarized as being concerned with "the increasing expression of intolerance towards Muslims," according to its introduction.

Speaking with Arutz Sheva, Campaign Against Antisemitism spokesman Jonathan Sacerdoti expressed his own surprise at the vote.

"Anti-Semitism is a challenge for the whole of society, not just for Jewish people," he said. "If these reports are correct, it seems surprising that fighting a rise in racist Jew hatred should be such a divisive issue for Amnesty."