Slippery Slope? US Army Cadets Ordered to Walk a Mile in Heels 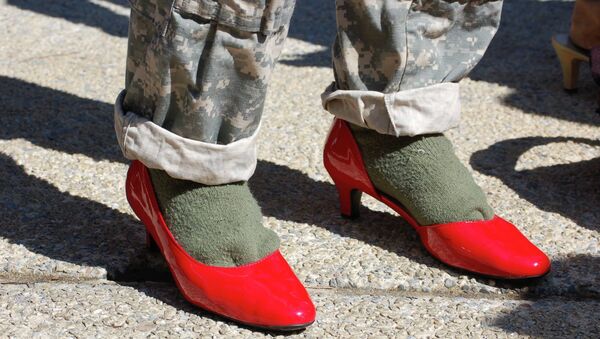 © Facebook/Temple University Army ROTC
Subscribe
International
India
Africa
An event where male-identifying individuals strapped on high heels to raise awareness about rape, sexual assault, and gender-based violence was held on Monday at Arizona State University. Few would deny the event’s good intentions, but some are not too pleased by the ROTC’s alleged mandatory involvement.

The annual event is held by the organization Walk a Mile in Her Shoes, which hosts these marches to provide “a playful opportunity for men to raise awareness in their community about the serious causes, effects and remediations to men's sexualized violence against women.”

“Our mission is to create a unique and powerful public experience that educates individuals and communities about the causes of men's sexualized violence against women, provides them with prevention and remediation strategies and empowers them to further develop and implement these knowledges and skills interpersonally and politically,” the organization explains on their website.

The Army openly encouraged cadets to participate last year, but this year “volunteering” reportedly became mandatory at ASU, with cadets pressured to participate in the march wearing heels along with their fatigues.

While raising awareness of violence against women is hardly objectionable, the apparent mandatory involvement of an entire ROTC battalion is raising some eyebrows. The battalion was reportedly required to purchase shoes and participate in the mile long march, donning red high heels in place of their boots.

“Attendance is mandatory and if we miss it we (g)et a negative counseling and a ‘does not support the battalion sharp/EO mission’ on our CDT OER for getting the branch we want.  So I just spent $16 on a pair of high heels that I have to spray paint red later only to throw them in the trash after 300 of us embarrass the army tomorrow,” an anonymous user wrote in a message posted to Imgur.

In a thread posted to Reddit more users expressed their concerns:

“I just don’t understand why Combs would court political controversy like this,” one user wrote. “Isn’t the military supposed to avoid faddish political movement and religious issues.  Anyways cross dressing violates several of our nation’s largest religions. That alone should have caused the Cadet Command to steer clear of this bullshit. Not to mention Army’s own f*cking policy.”

“They were threatened with negative counselling statements and OERs if they didn’t participate. It was pretty much ‘do this or we’ll kill your career before it even starts,” one person posted.

“Worthless ROTC commanders need to get booted for this incompetence.  As a combat vet this sickens me and is a setback for women in the military,” another commented.

Other users were upset about the uniform violation:

“This cause should be supported, and if you wanted to truly support it, then have the cadets do the march with a rucksack symbolizing the weight victims carry around after their assault. Then you have supported the cause and maintained uniform standards.”

“Any commissioned officer, cadet, or midshipman who is convicted of conduct unbecoming an officer and a gentleman shall be punished as a court-martial may direct.,” a user listed as possible violations stemming from the event.

The issue expressed by most was that, while activism can and should be an important part of civic engagement, should the US Army be allowed to choose what causes individuals are forced to support? Where will the line be drawn?

While the events are carefully promoted as “performance art” and not “protests,” they do seem to have the makings of one.  And requiring our military to protest for “good causes” seems a slippery slope, begging the question: who gets to decide what causes are “good”?