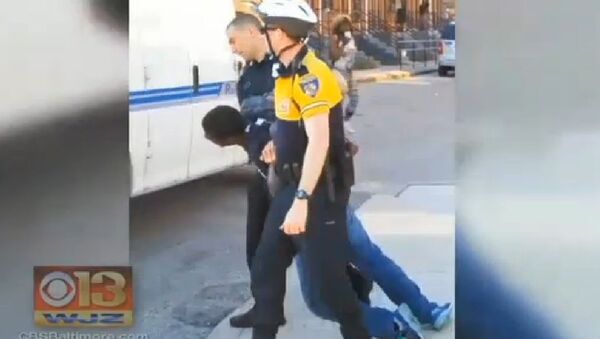 © Witness video (screen cap)
Subscribe
The Baltimore Police Department has suspended six officers with pay as they investigate the death of Freddie Gray after his arrest April 12. The 25-year-old died Sunday, a week after an encounter with police left him with serious injuries, and his community with serious questions.

Officials announced at a news conference Monday that an autopsy had been carried out finding "no evidence of physical force" in the April 12 arrest, but that a full report would be released next Friday, in a run up to an independent investigation.

The death of yet another black men at the hands of police has once again raised questions about brutality, accountability and community harassment. Though officials reiterated their commitment to transparency, basic questions about the incident are as yet unanswered.

Part of Gray's arrest — much like the death of Eric Garner in at the hands of the NYPD — was caught on camera by witnesses with cell phones cameras. Video shows Gray crying out in pain and being dragged into a police van.

At the press conference, city officials expressed condolences for Mr. Gray's family and pledged a full and transparent investigation into the incident to determine what happened between Gray's apprehension at about 8:40 am and 9:24 am when medical help was requested.

According to court documents, Gray was arrested "without force or incident" and "suffered a medical emergency" while being transported by police. Officials revealed Monday that early complaints by Gray that he needed an inhaler were not heeded by officers who only later summoned medics to take Gray to the hospital.

That "medical emergency" during transport — which is not described in any greater detail in court documents — somehow left Gray with severe injuries, including a spinal cord that was 80% severed, and a partially crushed voice box, according to the Gray family's attorneys. After slipping into a coma in the hospital, Gray died a week later.

Unsurprisingly, community members are not satisfied with the vague explanations offered in the report and by the police so far, and have been protesting the incident, demanding answers. Mayor Stephanie Rawlings-Blake told reporters at the press conference she understands protesters' frustration.

"No Law Against Running"

One of the most central questions hanging over the incident — which was not answered in Monday's press conference — was why the police had pursued Gray in the first place.

Deputy Commissioner Jerry Rodriguez told reporters that at 8:39 am three officers on bikes who were in a "hot spot" — an area known for high crime — had made "eye contact" with Gray and one other man when Gray ran away "unprovoked" at which point the officers pursued him.

Court documents indicate that after police caught up with Gray following a short chase on foot, officers said they noticed a knife clipped to his pants pocket, which turned out to be a switchblade.

As for why the officers pursued Gray to begin with, Police Commissioner Anthony Batts had no answers, conceding, "There is no law against running."

Gray family attorney William Murphy released a statement which directly attributed the vague answers of the police department to a cover-up attempt.

"We believe the police are keeping the circumstances of Freddie’s death secret until they develop a version of events that will absolve them of all responsibility. However, his family and the citizens of Baltimore deserve to know the real truth; and we will not stop until we get justice for Freddie."

Police Claim "No Evidence of Use of Force"

While Rodriguez said a full report would be released a week from Friday and then an independent investigation would be undertaken, he did reveal some conclusions from Monday's autopsy.

"We had no evidence, or video or physical evidence of use of force. No evidence in the autopsy. None of his limbs were broken," he said. "He did suffer a tragic injury to his spinal cord."

In response to reports that witness video posted online shows an officer with his knee to Gray's back at one point, Rodriguez pointed to the poor quality of the video, saying they hope to have it augmented to better be able to decipher the officers' actions.

According to the police timeline, in a matter of minutes after the first "eye contact," Gray was in custody and officers requested a wagon to come pick him up. About ten minutes later the van drove off. At some point, early on, Gray requested an inhaler, which he did not have on him. But nothing was done to seek medical care until 9:24 am, almost 30 minutes after he was first transported by police.

The incident has once again brought up the issue of police body cameras, increasingly brought into use by departments as an attempt to respond to accusations of police brutality and unaccountability.

Rodriguez said there will be new body cameras purchased for cameras but he added that while "I am a proponent of body camera, I also think they're not a panacea."

Mayor Rawlings-Blake then jumped in to add her view on the limitations of body cameras in this instance.

"Its clear that what happened, happened inside of the van… Even if officers had body cameras it would not have covered that period of time," she said, adding that they were looking into having cameras put inside of transport vehicles.

One of the policy changes discussed by Commissioner Batts was to request medical assistance by default if a person in custody requests it, which has been debated in other police departments following deaths in custody.

The issue of a timely medical response was raised in the death of Derek Williams, 22, of Milwaukee, who died while handcuffed in the back of a police cruiser in July 2011. Dashcam video later released outraged the public as Williams can be seen gasping for air and eventually expiring.

Though Milwaukee police department policy stipulated that officers were to "remain cognizant of any changes in the condition of an arrestee that would require medical treatment," an internal investigation found no reason to take action against the officers.

Previous to this incident, the Justice Department was already investigating the Baltimore Police Department in response to residents' complaints of excessive use of force and harassment. The Department's Office of Community Oriented Policing Services announced in October 2014 that federal agents would work with the police in a  "collaborative review."

Mayor Rawlings-Blake and Commissioner Batts themselves requested the review just days after the Baltimore Sun reported that the city had paid out $5.7 million in settlements in 102 lawsuits over police misconduct since 2011.