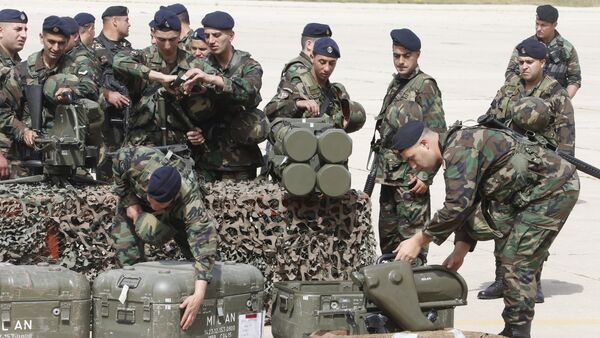 First weapons and other military aid from France arrived in Lebanon on Monday.

France Sends Arms to Lebanon for ISIL Fight
BEIRUT (Sputnik) – The first delivery of weapons and other military aid from France arrived in Lebanon on Monday, a RIA Novosti correspondent reported.

The French defense minister, his Lebanese counterpart and the Saudi ambassador were all present during the transfer of aid to Lebanese authorities.

"The visit of the French defense minister is indicative of the special relations between our countries… The first batch of weapons is delivered during the visit," Lebanese Defense Minister Samir Moqbel said.

In August 2014, Saudi Arabia allocated $3 billion to purchase weapons from France to help the Lebanese armed forces, with Paris undertaking to supply weapons for three years.

In August 2014, violent clashes between Lebanese forces and militants erupted in the northeastern city of Arsal, with extremists capturing some 30 Lebanese servicemen.