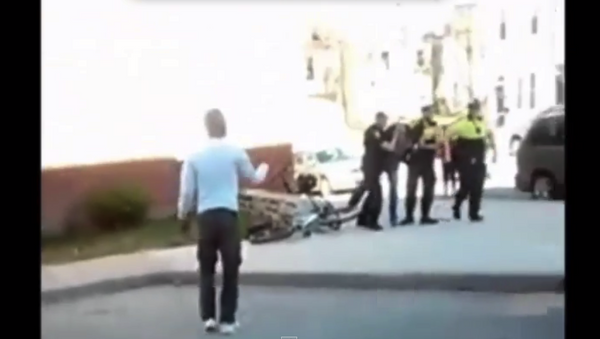 © Youtube/producertony2001
Subscribe
Freddie Gray, the Baltimore man who was severely injured while being arrested last week, died today in what many are calling yet another example of police brutality.

Freddie Gray was stopped by Baltimore officers the morning of April 12 but tried to run. He was caught and placed in the prisoner wagon shortly later and transported to the Western District police station. More than an hour later, an ambulance was called to the station to treat him.

Cell phone video of the arrest shows an incapacitated Gray being dragged away by police officers while handcuffed. A voice can be heard warning the officers that he appears critically injured.

Gray was found to have suffered broken vertebra for which he underwent surgery. He fell into a coma afterward and never recovered. He was also found to have an injured voice box.

Gray’s death came just a few hours after hundreds of Baltimore residents protested his beating at the hands of police. Barricades surrounded the Baltimore police headquarters where they reallied. “No justice, no peace, we don’t need you on our streets,” protesters chanted at the police.

“What happened to Freddie was unnecessary and uncalled for,” Rev. Jamal Harrison Bryant of the Empowerment Temple shouted to protesters. “All of those police officers involved need to be held accountable and answer for what they did, and need to be terminated from their positions.”

Baltimore police are conducting a criminal investigation, they said.

Deputy commissioner Jerry Rodriguez said at a news conference on Sunday that a criminal investigation was under way.

“It’s a two-part investigation,” Deputy commissioner Jerry Rodriguez said at a news conference. “One is a criminal case, for Mr Gray and also the officers. We always have that component in there to determine whether there is criminal culpability.”

The mayor also vowed to ensure the city held “the right people accountable.”

Mayor Stephanie Rawlings-Blake said her office would be asking “How was Mr Gray injured? Were the proper protocols and procedures actually followed? What are the next steps to take from here?”