Veterinarian Fired After Posting Photos of Cat Speared by Arrow 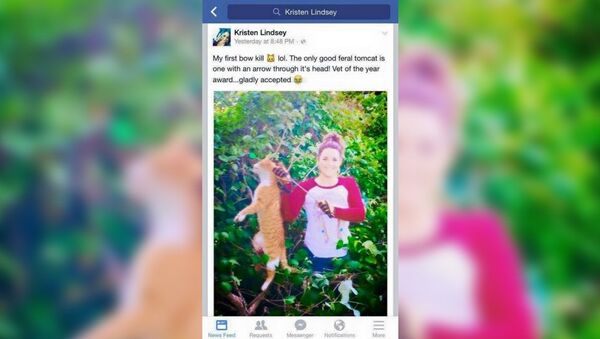 A veterinarian in Texas is under investigation and under fire after she posted a Facebook photo of her with a cat she said killed with a bow and arrow.

Kristen Lindsey posted a photo of her holding a tabby with an arrow through its head. The post included text in which she claimed to have killed it.

“My first bow kill, lol. The only good feral tomcat is one with an arrow through it's head! Vet of the year award… Gladly accepted,” it reads. 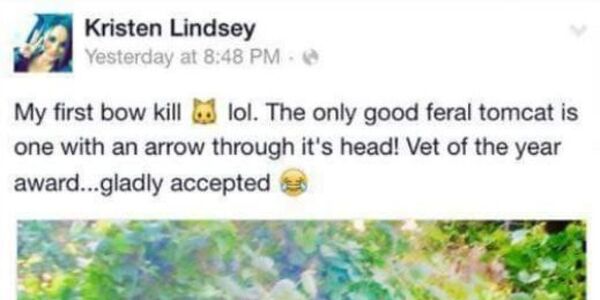 Screen shot of veterinarian Kristen Lindsey's Facebook post in which she boasts having shot a cat with a bow and arrow
An immediate backlash ensued and Lindsey has since lost her job and has been called in for questioning by local authorities.

Washington Animal Clinic, where Lindsey worked, received hundreds of calls after the photo went viral leading them to fire her. The clinic went so far as to cover her name on the sign with duct tape.

"Our goal now is to go on and try to fix our black eye and hope that people are reasonable and understand that those actions don't anyway portray what we're for here at Washington Animal Clinic," clinic spokesman Dr. Bruce Buenger told local media. "We put our heart and soul into this place."

Adding to her woes, Colorado State, where Lindsey received her doctorate in veterinary medicine, sent a letter students and staff calling the incident “disturbing” and “grotesque.”

“Many of us are aware of the deeply disturbing news involving a Colorado State University veterinary graduate who has worked in Brenham, Texas, and appears to have posted on Facebook a very distressing photograph and boastful comments about killing a cat with a bow and arrow,” the letter read. “In the course of one day, the post and outraged response have blown up through social media and as a news story in traditional media outlets.”

The dean also pointed out that graduates of veterinary school take an oath that precludes them from engaging in that type of behavior.

“Being admitted to the profession of veterinary medicine, I solemnly swear to use my scientific knowledge and skills for the benefit of society through the protection of animal health and welfare, the prevention and relief of animal suffering, the conservation of animal resources, the promotion of public health, and the advancement of medical knowledge,” it reads.

So far, police have not arrested Lindsey saying they were investigating the incident.

"I've had people calling me from all over the country expressing their concern," Austin County Sheriff Jack Brandes told KBTX. "I just want everybody to know several things. We can't arrest and charge someone like that based on a picture on the internet. We have to make sure that is true and correct. Anybody can take a computer and alter a photograph."

“Unlike TV, these investigations take time,” his department added in a statement. “There is no way we can say with certainty exactly when the investigation will be complete. When that event occurs, we will post on this Facebook page that the reports have been turned over to the prosecutors.”

The investigation has already determined, however, that the cat in question was not actually “feral” and belonged to an elderly couple that lives in the neighborhood.