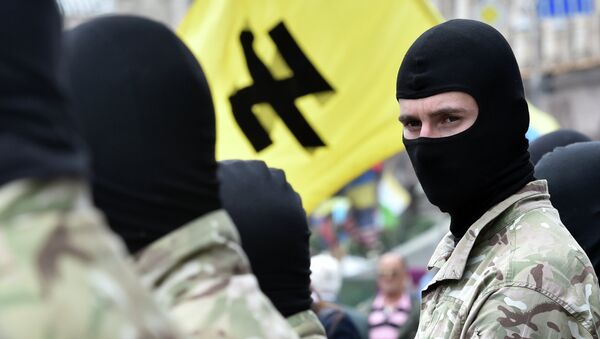 © AFP 2021 / SERGEI SUPINSKY
Subscribe
Radical nationalist movements are currently on the rise in Ukraine. A group of neo-Nazis marched on the streets of Odessa to commemorate the death of the former leader of Ukrainian ultranationalist group "Blood and Honor."

A group of neo-Nazis organized a march in the Ukrainian city of Odessa to commemorate the death of Maxim Chaika, the leader of Ukrainian ultranationalist organization “Blood and Honor,” local media reported.

Around 200 Ukrainian neo-Nazis gathered at the march, shouting racist, anti-communist and nationalistic slogans. Among the many slogans that the nationalists used, the most prominent ones were “The White man is for the Great Ukraine,” “One race, one nation, one homeland,” and “Hang the commies,” according to Odessa’s Dumskaya.net

Neo-Nazis in #Odessa march for the "white man". Some riveting images from #Ukraine http://t.co/Q9mIVkJWG6 pic.twitter.com/sZFXe1ziLF

Utterly senseless was the fact that although the nationalists seem to embrace everything Ukrainian, they walked around wearing Celtic crosses and Germanic symbolisms.

Ukrainian Insurgent Army Claims Responsibility for Death of Reporter Buzina
The nationalist march happened in the city, where on May 2, 2014, scores of people were killed following clashes between pro-Kiev nationalists and local activists, who supported the idea of Ukraine adopting a federal government. At least 48 people died and over 200 were injured. Local officials accused Kiev of covering up the actual death toll, which is believed to be at least 116 people.

Radical nationalist movements are currently on the rise in Ukraine. Earlier this week, Ukrainian journalist Oles Buzina and politician Oleh Kalashnikov were allegedly murdered for their “anti-Ukrainian” stance. A nationalist group, known as the Ukrainian Insurgent Army, claimed responsibility for the murder of the journalist and the former Party of Regions member. 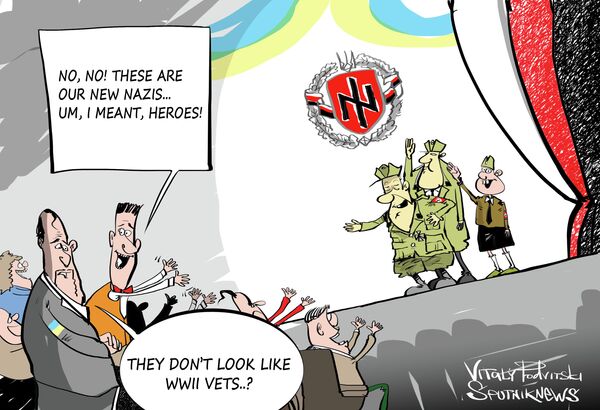