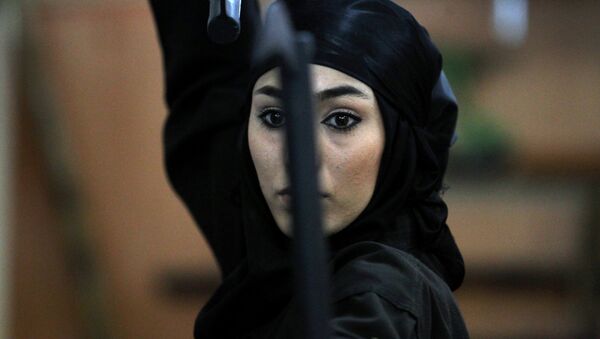 Three years ago, Reuters was kicked out of Iran after the news agency published a story, claiming that Tehran was preparing an all-female squad of professional killers trained in ninjutsu, a lethal martial art practiced by ninjas.

The original story caught the public’s attention. Readers from around the world wanted to know more about the all-female squad of Iranian ninjas. Sputnik managed to get in touch with Tehran’s “notorious” ninja-training club and spoke with head coach Akbar Faraji to reveal the secret that left many in awe after the original story was published in 2012.

Turns out, ninjutsu is not a new thing in Iran, as women have been training in this form of martial art over two decades. Faraji himself has been coaching ninjutsu more than 12 years, the ninja-master told Sputnik in an exclusive interview.

The training regimen of Iranian ninjas is quite similar to those of other martial arts practitioners from around the world. Faraji said he traveled to other countries, including Russia, to exchange his knowledge with other ninjutsu experts. Faraji aims to reveal his students’ “inner self,” as he called it, and added that the key thing in ninjutsu is to make students interested in the training process and ensure that they are constantly developing their skills.

Faraji trains both men and women. He said it doesn’t matter whether his students are men or women, as long as they are learning the ancient art and the philosophy surrounding it.

However, there are indeed a lot of women that train in ninjutsu in Iran. The reason is simple: ninjutsu requires a full-body keikogi, a traditional uniform that must be worn during training. Since the training gear covers the whole body, ninjutsu classes attract women of all ages, including those who follow the strict Sharia rules.

“We have 5 to 6-year-old girls, as well as 50-year-old women who train in our club. Depending on their preferences and their fitness level, women are free to choose exercises of various difficulty levels,” the head coach said.

“The information that they published is not true in any way! We’re a sports facility. Judge for yourself: we conduct our training in accordance with rules, adopted by not only the Martial Arts Federation of Iran, but also by the International Ninjutsu Society… I’m not a terrorist, I’m a coach.”When asked about the Reuters story that claimed Faraji was training “professional assassins,” the coach said it was total nonsense and blamed the news agency for biased and prejudiced reporting.

According to Faraji, a woman, who came from Reuters to write the report, managed to pull the wool over his eyes. The journalist claimed she was doing a report on the leisure activities of Iranian women who train in martial arts. The coach didn’t doubt her real intention until the story was published and because of that he had experienced some trouble. If he had known her real objective for taking pictures and writing the story, he would have never even spoken to her, the coach said, regretting his past mistake.