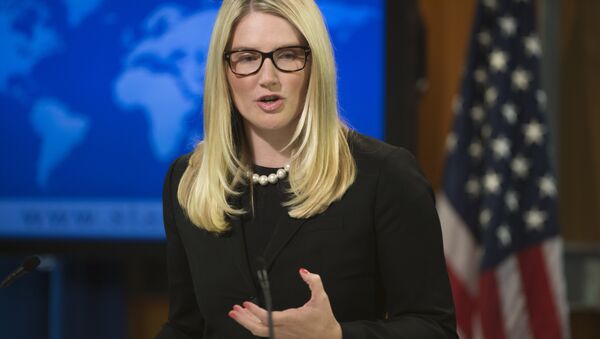 © AFP 2021 / Saul LOEB
Subscribe
Washington urged world leaders to “consider what is happening in Ukraine” before they agreed to attend the May 9 Victory Day parade in Moscow, the State Department’s acting spokeswoman Marie Harf admitted during a news briefing in Washington on Thursday.

Current US Policy Toward Russia Likely to Remain Unchanged
When asked whether Washington had advised leaders of other countries not to attend the Moscow event Marie Harf  said there were a variety of ways that the world would  honor Victory in Europe Day, including on May 8 in Washington, and that each country had decided for itself whether to go to Moscow or not.

But after one of the attending reporters mentioned the 25 million people the Soviet Union lost during WW2, Marie Harf said, “this is something we feel very deeply about. But for this military parade specifically, which is one – one event, we took into account what was happening in Ukraine and we are encouraging other countries to take the same thing into account.”

“They can make their own decisions about who they send, and it’s not up to us to make – to pass judgment on that. It’s their decision. We’re just making clear what our position is and that we hope they would consider the same,” Marie Harf added.

She had earlier said that at the military parade specifically in Moscow on May 9, the United States would be represented by Ambassador John Tefft.