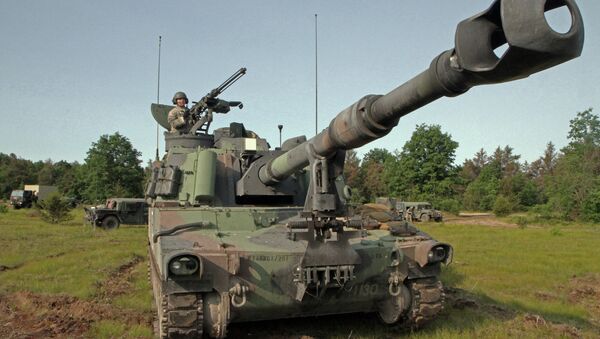 Andrew Korybko
All materials
The Nordic states’ joint declaration against Russia follows the pattern of Eastern Europe and may foretell the creation of another NATO regional bloc.

Greater Scandinavia surprised some in Europe when its associated countries of Sweden, Finland, Norway, Denmark, and Iceland issued a joint declaration calling Russia the “biggest challenge to European security” and promising to step up their multilateral military cooperation as a result.

Astute observers, however, had already seen this coming, since Sweden, although being a non-NATO member, has de-facto led the coalition’s anti-Russian efforts in Northern Europe in an effort to restore its long-lost imperial influence over the region.

The same can already be said for Poland, which has behaved in the same way and for the same purposes, meaning that all eyes are now on Romania to see if it’ll walk in step with Washington and it’s Lead From Behind partners in forming the final key piece of the New Iron Curtain that’s descended upon Europe.

NATO expansion has been the most destabilizing event in Europe since the end of the First Cold War, and it’s one of the primary causes of the second one, too.

The US uses the organization to continually push against the strategic depth that Russia retained after 1991, with the ultimate goal of undermining its military deterrence potential and tilting the odds in favor of a future first strike.

Should the military-strategic balance change in favor of the US and NATO and parity becomes a concept of the past, then Washington can use the new state of affairs to blackmail Russia into acquiescing to its various dictates, be it that Moscow stand down from its multipolar vision of the world to forcing it to open its blessedly endowed natural resources to full exploitation by Western companies.

The Ukraine Problem: Another Cold War?
Ever since the New Cold War began after the US’ successful EuroMaidan Color Revolution in Ukraine and the subsequent civil war that it helped enflame on Russia’s borders, Washington has transferred its Lead From Behind strategy to Europe in order to assist with the creation of an anti-Russian ‘cordon sanitaire’, a.k.a. the New Iron Curtain.

The US encourages former regional powers to support its grand strategy in exchange for its recognition of their restored sphere of influence afterwards.

Ideally, the US wants its New Iron Curtain to incorporate Scandinavian, Eastern European, and Southeast European components, hence its designation of Sweden, Poland, and Romania as Lead From Behind partners.

It’s also important to add that in the case of Sweden and Poland, artificially manufactured provocations were capitalized upon in order to solidify the US’ anti-Russian agenda in each region, which bodes very ominously for fragile stability between Moldova and Transnistria as regards Romania.

Let’s look at the two examples constructed so far before forecasting how the US will bring its New Iron Curtain all the way down from Scandinavia to Southeastern Europe:

US, Allies Account for Over 60% of Global Military Spending - SIPRI
Sweden used to be one of the most powerful empires in Europe during the mid-1600s, occupying Finland, the Baltic States, and a part of Norway. The Great Northern War against Russia’s Peter the Great was the dramatic beginning of the end for Stockholm’s regional dominance and the country eventually faded out as a non-power, albeit one with a lingering imperial ambition.

Its leaders appear to think that now is the perfect time for restoring its lost empire, since Sweden has been hard at work trying to become one of the most anti-Russian states in Europe.

Nowadays it’s the most populous and strongest economy of the five Greater Scandinavian states earlier mentioned, and thus, it understands that it has the potential to become their de-facto leader if it plays its cards right.

In 2009, former Foreign Minister Carl Bildt became one of the founders of the EU’s Eastern Partnership that forced Ukraine to make the civilizational choice that it wasn’t ready for and shouldn’t have even had to make in the first place. Then, in September 2014, it used the excuse of the Ukrainian Civil War to blame Russia as an aggressor and sign a Host Nation Support accord with NATO together with Finland, the latter of which is strongly under Swedish political influence and was historically viewed by Stockholm as ‘East Sweden’. Last October, it invented the Russian phantom submarine myth to justify its military buildup in the Baltic and a bolstered defense budget.

In the current regional configuration, the US envisions Sweden as the economic and military powerhouse that can exude soft power throughout all the other four members.

Finland is the military frontier owing to the 1,340 km border it shares with Russia, and even if it doesn’t officially join NATO, the fact that it’s now a ‘host nation’ means it’s being integrated into Shadow NATO just like Ukraine currently is.

Denmark controls the entrance into and out of the Baltic, which is critical for the movement of Russia’s submarines, and Norway has the natural resources to assist the ‘Scandinavian Squad’. Finally, Iceland is the gateway to the North Atlantic for Russia’s Northern Fleet, and can be used together with Danish Greenland and Norway to monitor Moscow’s naval movements there.

The situation in Eastern Europe is more clear-cut than that of Northern Europe and more well-known to international audiences.

Poland Goes on Military Spending Spree Citing Fear of Russia
Poland is the former hegemon with a damaged imperial ego, and aims to de-facto restore the Polish-Lithuanian Commonwealth over the lands of Western Ukraine and Belarus. After all, former Foreign Minister Radoslaw Sikorski worked with Mr. Bildt in creating the Eastern Partnership, which does more for Warsaw’s interests than Stockholm’s.

One should also be reminded that Poland is the host nation of the US’ contentious missile defense infrastructure that could one day undercut Russia’s nuclear deterrence.

Joining in the ‘fun’ is Poland’s historical sidekick Lithuania, and it’s difficult to tell which of the two is more hysterically paranoid of Russia.

These two states have created a joint brigade with Ukraine that serves as the vehicle for Kiev’s integration into NATO, which is now the country’s formal goal as per its new five-year national security doctrine that debuted last week.

The Last Brick in the Wall

Rounding out the US’ New Iron Curtain is Romania, which is seen as the keystone for NATO’s naval strategy in the Black Sea.

Nation Divided: Nearly 50% of Moldovans Oppose Entry Into NATO
During the interwar period, the country controlled Moldova, which it shares close cultural and linguistic connections with, and there’s been talk since 1991 of repeating this scenario, be it through legitimate means (referendum) or illegitimate ones (the failed 2009 ‘Twitter Revolution’ in Chisinau).

No manufactured ‘event’ has yet occurred to create a crisis with Russia (although ties are already pretty frosty because of the country’s hosting of the US’ anti-missile infrastructure), but it’s very probable that some sort of provocation could be constructed in Transnistria in order to achieve this or to position Romania as the Shadow NATO integrator of Moldova.

Bucharest is also important because of its Black Sea coast, which makes it immune from the 1936 Montreux Convention that limits out-of-regional naval forces in the area, and the US has thus been building up Romania’s naval capabilities in order to compensate for its failed plans in Crimea after the reunification saved it from NATO occupation.