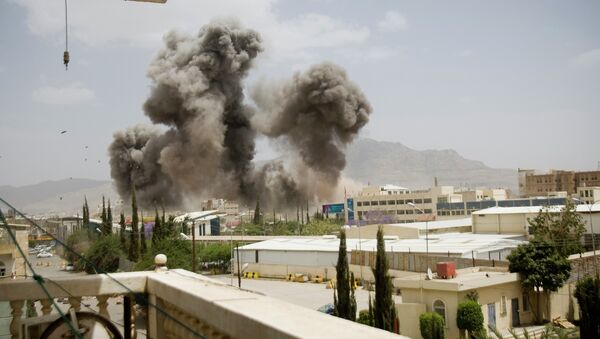 Finian Cunningham
All materials
The United Nations Security Council needs a name-change in the interests of accuracy and truth in language. It should henceforth be called the Insecurity Council. Or better still, the UN Council for Aiding and Abetting Aggression.

G7 Foreign Ministers Support UN Resolution on Arms Embargo to Yemeni Rebels
Not content with wanton bombing of the poorest Arab country — Yemen — with hundreds of warplanes, the US and its dictatorial Saudi allies have now bounced the UNSC into trying to "legally" disarm the rebels in that country.

This is while the US is moving to increase its weapons supplies to the Saudi-led bombing coalition, as well as providing sharper targeting information and logistics.

American warships are reportedly helping Saudi vessels to blockade the Red Sea country to ensure that no arms find their way into Yemen. No arms supplies have yet been detected after American and Saudi naval forces began boarding suspected ships off the Yemeni coast.

This week the ill-named UN Security Council voted 14-0 to impose sanctions and an arms embargo on the people of Yemen who are fighting for their political independence. The resolution was drafted and supported by Saudi Arabia and other Persian Gulf monarchies as well as the United States. Jordan, one of the 10 non-permanent members of the council, proposed the draft resolution. How flagrantly self-serving is that?

Russia Calls Together UNSC Meeting on Humanitarian Situation in Yemen
All of those countries mentioned are the main participants in the ad hoc foreign military coalition that has been bombing Yemen for the past three weeks. This coalition hasn't a legal mandate to carry out its military actions. Such actions therefore amount to criminal aggression.

Russia alone did not vote for the UNSC resolution this week, choosing instead to abstain, although it could have cast a veto as one of the five permanent members of the council. That may prove to be a costly mistake by Russia not to check the rampant aggression that Washington and its Arab allies are once again embarking on in another Middle Eastern country.

The latest so-called resolution was passed while Yemen is being bombed into destruction by the coalition of foreign powers led by Saudi Arabia and the United States. The UNSC said nothing towards halting the airstrikes, never mind censoring the illegality of the foreign coalition — as it should do if it were indeed a "security council".

Last week, a Russian drafted resolution calling for a halt to the bombing and the implementation of a "humanitarian ceasefire" to allow aid agencies into Yemen was rejected by the UNSC. Separately, a peace plan put forward by Iran has also been spurned by Saudi Arabia.

The US-Saudi bombing can therefore continue raining down destruction on the people of Yemen, while any means to defend themselves are being denied. This is known as stacking the deck even though those stacking the deck are an international lynch mob with excessive numbers on their side and with warplanes, warships and satellites delivering shock-and-awe firepower. How pathetically cowardly can you get?

But what this move shows is that the coalition armed-to-the-teeth by Washington is fearful of defeat in Yemen.

Past Mistakes: Will Yemen Become Saudi Arabia's Vietnam?
For the US-Saudi bombing of the Arab region's weakest country is not going well. Not well at all. Nearly three weeks of constant airstrikes have pounded Yemen into ruins, left hundreds of innocent civilians dead, and turned the country into a humanitarian disaster.

Yet, in spite of all this mayhem inflicted by wave after wave of American-supplied and coordinated warplanes, the supposed military objectives are in tatters.

The Houthi rebels, who kicked out the American and Saudi-backed puppet-regime of Abd Rabbuh Mansur Hadi earlier this year, have steadily increased their military control over the country since the US-Saudi foreign coalition began bombing Yemen on March 26.

The Houthis are spearheading the popular uprising against the old regime. When Saudi Arabia and the gang of other Arab countries, including Egypt, Jordan and the Persian Gulf monarchies, declared their air strikes on Yemen the assault was said to be aimed at two
objectives: crushing the Houthi rebels and driving them back to their tribal base in the northern hinterland; and, secondly, to reinstate the regime of exiled deposed leader Hadi.

The latter is holed up in Saudi capital Riyadh awaiting further instructions from his masters, while being given prestigious platform in the New York Times to write oped pieces whitewashing the slaughter being carried out in his name.

Neither of the US-Arab objectives is remotely near achievable. The Houthis appear to have galvanised even more popular support among the Yemeni population. Ordinary Yemenis have been outraged by what they see as foreign aggression on their country. This broad-based support cuts across tribal and sectarian religious lines, thus disproving Saudi and Western claims that the Houthis are a Shiite proxy serving Iranian regional ambitions.

Saudi Arabia in particular is in a quandary about what to do next. It can't win from an air war alone, despite the massive firepower at its disposal. And the oil-rich kingdom is loath to send in ground troops fearful of how the battle-hardened Houthis could drag the invader into a disastrous guerrilla war. Such an outcome could end up destabilising the House of Saud, beset by its own internal tensions among its restive and oppressed population.

Egypt and the other Gulf Arab dictatorships are talking with bravado about "joint military exercises" being conducted from Saudi territory.
But none of these countries appear bold enough to take on a ground war inside Yemen. Even Pakistan, which earlier had offered military forces for a Saudi-led invasion of Yemen, has lately backed away from that perilous idea.

Washington realises too that its Arab allies are in no shape to take on a land assault. It is reportedly telling the Saudis to focus air strikes on pushing back the rebels from Sanaa, the Yemeni capital, and to forget about the other stated objective of re-installing the Hadi regime — at least in the short-term.

New Yemen Vice President Hopes Saudis Avoid Ground Invasion
The Saudis have even resorted to sending in thousands of al-Qaeda-linked Takfiri brigades relocated from Syria to join up with al-Qaeda in the Arab Peninsula. But the Houthis, joined by remnants of the Yemen Army, have managed to thwart the jihadist mercenaries in the Central and Eastern provinces.

That is why the UN "Insecurity Council" was called upon this week by the Saudis and their Arab allies — no doubt under US tutelage — to impose an arms blockade on Yemen. With support from Washington, the move has nothing to do with seeking an end to violence in Yemen. Far from it. It is rather a desperate attempt to stack the deck in favour of the US-sponsored Arab coalition bombing Yemen.

That coalition is facing an embarrassing defeat in Yemen and needs to accrue an unfair advantage in its futile attempt to bomb the country into submission.

The wording of the resolution not only calls for the disarming of the rebels. It also wants them to surrender territory that they have gained over recent weeks.

Unwilling to invade a hostile territory and unable to win from an aerial blitzkrieg, despite awesome firepower and shocking atrocities against the civilian population, the American-Saudi lynch mob wants the legalistic mechanism of the UN to aid and abet its nefarious purpose in Yemen.