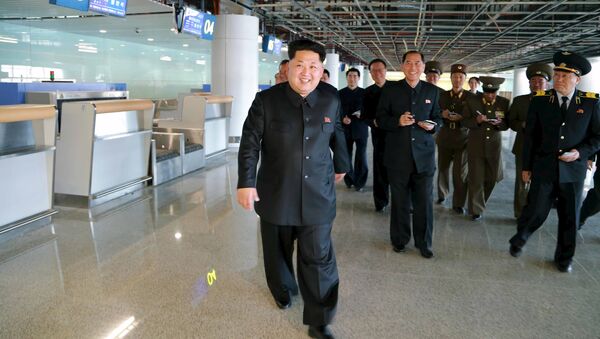 © REUTERS / KCNA
Subscribe
International
India
Africa
The details of Kim Jong Un’s visit to Moscow for the May 9 Victory Parade are yet to be finalized with the North Korean side.

“The North Korean leader’s program is on the preparatory stage, after that, the preparation will be finalized together with our North Korean friends and only then can we make an official statement,” Peskov told journalists.

Russian presidential aide Yuri Ushakov said December 2014 that Kim received an invitation to attend the 70th anniversary celebrations of the victory over Nazi Germany in WWII in Moscow, and there were signs the high-profile visit would take place.

But Peskov said Friday any further announcements concerning the details of the visit would come from the Korean side:

“This should be announced by the North Korean side. We can’t make any announcements for them in regard to their leader’s program. This would be incorrect.”

Serbian Army to Take Part in Victory Day Parade in Moscow
Ahead of Victory Day, Russia sent out invitations to numerous world leaders, inviting them to the May 9 military parade in Moscow. At least 25 states have confirmed they will attend the event. A full list will be published by the end of April.