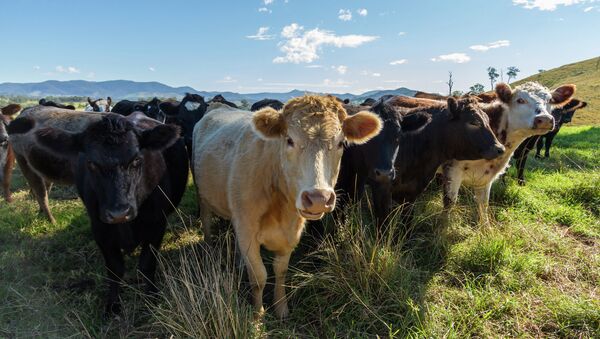 CC BY 2.0 / mdalmuld /
Subscribe
International
India
Africa
A new report asserts that a Texas man who died from a rare brain disease likely got it from eating beef contaminated with mad cow disease while living in the Middle East, decades ago.

The condition is so rare in the United States that the man was hospitalized several times for psychiatric symptoms before doctors correctly diagnosed him with variant Creutzfeldt-Jakob disease, a disease commonly referred to as “mad cow disease” when it is found in cattle.  Unfortunately, he died 18 months after initially showing symptoms.

Symptoms of the disease include jerky and involuntary movements, trouble with reflexes, hallucinations, and changes in behavior including becoming more secretive and withdrawn.

The disease is believed to be contracted through eating contaminated beef containing infectious prions, or proteins that form lesions on the brain.  There had been three documented cases in the United States prior to this man’s death, and all patients had previously lived in the UK or Saudi Arabia.

Meanwhile, there have been around 200 cases of the disease in the United Kingdom, all of which were tied to eating contaminated beef in the 1980s and 1990s, Yahoo reported.

The man who passed away last year had never lived in the United Kingdom or Saudi Arabia, but he was born in the Middle East and lived in countries that imported beef from the UK until he moved to the United States in the 1990s.  He was reportedly healthy until 2012 and passed away in 2014, despite likely being exposed to the contaminated meat decades ago.

"This case underscores that the diagnosis of vCJD should not be dismissed if the patient has not resided in a country with a known endemic case of vCJD," researchers wrote in the Journal of Emerging Infectious Diseases. "Given the several decades' long potential incubation periods estimated from epidemiologic modeling, the international occurrence of additional vCJD cases can be reasonably anticipated."