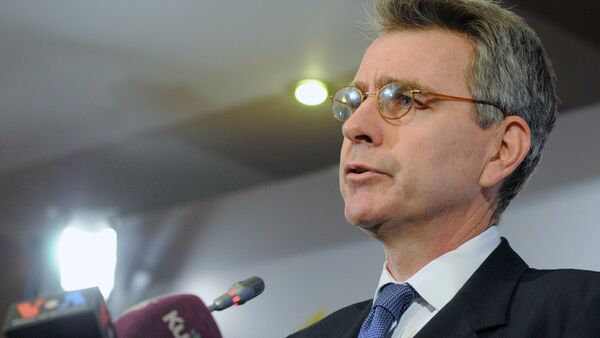 © Sputnik / Alexandr Maksimenko
/
Go to the photo bank
Subscribe
The US ambassador to Ukraine Geoffrey Pyatt believes that the conflict in Donbass should not be allowed to hinder the implementation of reforms in Ukraine.

Russia Gives Gas Discounts to Ukraine to Help Its Residents - Putin
"This small piece of territory of Ukraine is not obliged to inhibit further movement of Ukraine towards reform and progress," Pyatt told reporters on Thursday.

Exactly a year ago the Kiev government launched a military operation in the country’s eastern Donbass region to crush a local protest against the February 2014 coup that ousted the previous government of President Viktor Yanukovych and Prime Minister Mykola Azarov.

According to UN data more than 6,000 people have since died in the bloody conflict that erupted shortly after.

Ukraine is now facing the prospect of a full-scale default with soaring unemployment and the national currency plunging more than three times.

According to a Finance Ministry report the average monthly salary in January amounted to 3,455 hryvniyas,  or about $160, – one of the lowest in the EU.

Prime Minister of Ukraine Arseniy Yatsenyuk said that in 2015, the country faces the challenge to survive, and that “absolutely everyone” in the country will feel the pinch of the dire economic straits the country is going through.

And feel they do as a recent poll indicated that about 70 percent of Ukrainians were dissatisfied with their material wellbeing and said that the country was moving in the wrong direction.

The government hopes to rectify the situation with the help of foreign loans. Including from the IMF whose bailout program for Ukraine provides for the allocation of $17.5 billion, and the total amount of foreign loans to be lined up in the next four years is estimated at $40 billion. Of these $15 billion will come through debt restructuring.

The IMF conditions for the provision of desperately needed funds forced the government to hike utility tariffs.

On April 1 the government raised tariffs on cooking gas, electricity and heat supply. In addition, the price of centralized supply of hot water for residents increased by 55-57 percent and for cold water, by nearly 25 percent.

From May 1 the tariffs for centralized water supply to residents is expected to go up to between four percent and 100 percent.