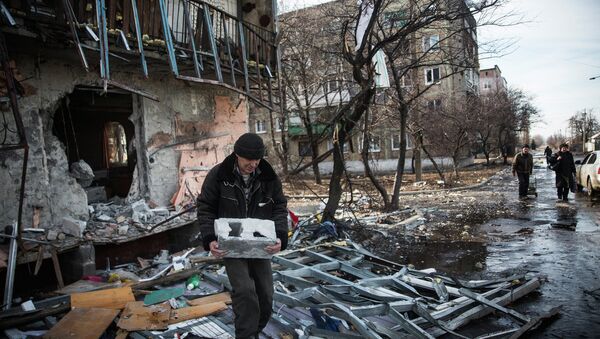 “I think this was a colossal mistake, and such moves bring the situation into a deadlock.”

Putin on the situation in Ukraine: By not fulfilling its social obligations, Kiev is cutting #Donbass off from Ukraine #DirectLine

In April 2014 Kiev launched a military operation in Donbas to suppress local independence supporters who refused to recognize the coup-imposed central government. According to the UN estimates, the conflict claimed over 6,000 lives and displaced more than a million people. It also brought Donbass to the brink of humanitarian catastrophe with people there struggling without basic necessities.

No Russian Troops Fighting in Ukraine - Putin
As the crisis in Ukraine escalated, Russia continued to participate in international efforts aimed at bringing the conflict to an end.

In mid-February, at a Normandy Format meeting in the Belarusian capital, the leaders of Russia, France, Germany and Ukraine elaborated a new Minsk deal, a 13-point plan aimed at facilitating Ukrainian reconciliation process.

The measures included a ceasefire that entered into force on February 15, the pullout of heavy arms from the contact line between Kiev and Donbass militias, an all-for-all prisoner exchange and certain amendments to Ukrainian constitution. At a Normandy Format talks in Berlin in April, the foreign ministers of the participating states confirmed their commitment to the Minsk agreement.

Russia Gives Gas Discounts to Ukraine to Help Its Residents - Putin
However, since the establishment of the truce, the sides repeatedly accused each other of violating it, with leaders of Donbass militias stating that Kiev was using the ceasefire to prepare for a new advance.

On Tuesday, the head of the self-proclaimed Donetsk People's Republic Alexander Zakharchenko said that Kiev had moved more than 100 pieces of military equipment closer to the eastern Ukrainian city of Donetsk.