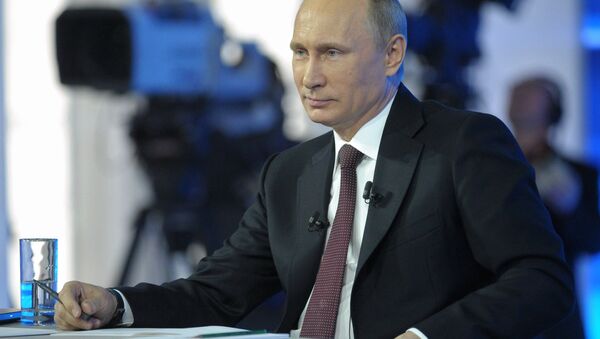 On Thursday, April 16 Russian President Vladimir Putin will answer questions from the public during his traditional live Q&A session.

The first "Direct Line with Vladimir Putin" was broadcast live by Russian television networks ORT and RTR and the radio station Mayak on December 24, 2001. At that time, Putin received 400,000 questions.

Considering that the broadcast lasted about two and a half hours, one hour longer than had been planned, Putin only answered 46 questions. 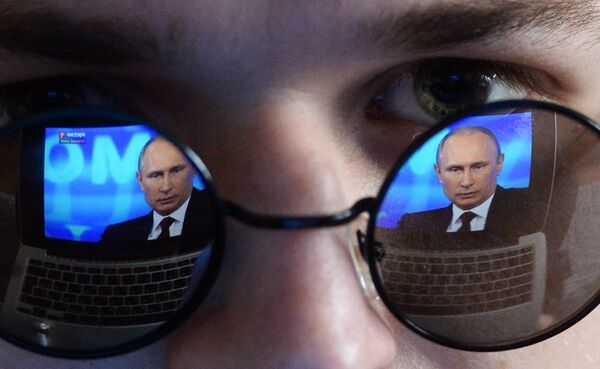 The studio from which the Q&A session was broadcast was connected with sites in Moscow, St. Petersburg, Kaliningrad, Murmansk, Kazan, Rostov-on-Don, Yekaterinburg, Novosibirsk, Vladivostok, and a settlement in the Krasnodar Territory. The president then promised to continue to hold these sessions to answer citizens' questions through live broadcasts.

The second session was held on December 19, 2002, and was broadcast by the television networks Channel One and Rossiya, and the radio stations Mayak and Radio Rossii. The session lasted 2 hours and 35 minutes. Putin answered 51 questions, while the call processing center received 1,422,000 calls.

Unlike the first session held in 2001 when the studio was mainly connected to large cities, in 2002 the studio spoke to six regional centers, two villages, and two towns. 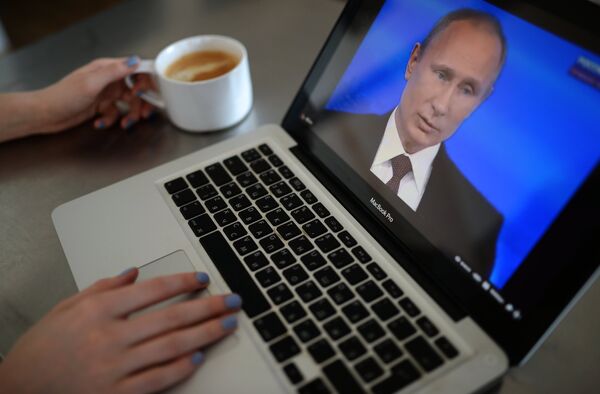 Putin to Hold Annual Live Q&A Session on Thursday
The president answered 68 questions from people in Moscow, Komsomolsk-on-Amur, the coal quarry Chernigovsky in the Kemerovo Region, Krasnoyarsk, the Kant Air Force Base in Kyrgyzstan, Drilling Rig No. 504 in the Vostochno-Surgutskoye oilfield, Nalchik, Vologda, the village of Novaya Derevnya in Stavropol Territory, Nizhny Novgorod, Michurinsk and Vyborg.

The session lasted 2 hours and 50 minutes. The percentage of questions answered was divided evenly between those sent via the Internet, which the president chose himself, those asked over the telephone, and those asked during the live broadcast. In all, there were 1,553,000 calls.

During that Q&A session, Putin announced his intention to run for reelection.

In 2004, the Russian president held a large-scale news conference in the Kremlin instead of a Q&A session.

On September 27, 2005, the fourth "Direct Line" was held. This time questions could be asked not only via a specially created website and by telephone, but also, for the first time, via a short messaging service.

Ask the President! Some of Putin’s Very Best Hotline Answers
As in previous years, most people were worried about economic and social matters. Within 2 hours and 53 minutes, Putin answered 60 questions, 14 of which he had chosen himself.

The overwhelming majority of the questions had to do with domestic policy; only six questions concerning international problems were raised, and just one was of a personal nature.

More than one million questions were registered, including one million by telephone and over 100,000 via the short messaging service. The most active categories were blue-collar workers, office workers, pensioners, students, and housewives, who were mainly concerned about salaries, pensions, housing, healthcare services, and support for those serving in the military.

On October 25, 2006, Vladimir Putin conducted his fifth "Direct Line" with the nation. It was broadcast live on television and radio and lasted 2 hours and 54 minutes.

The president answered more than 50 questions asked via video linkups with populated centers in various parts of the country, by telephone, and on the Direct Line website. Of these, 41 dealt with domestic matters, nine with international affairs, and two were of a personal nature. 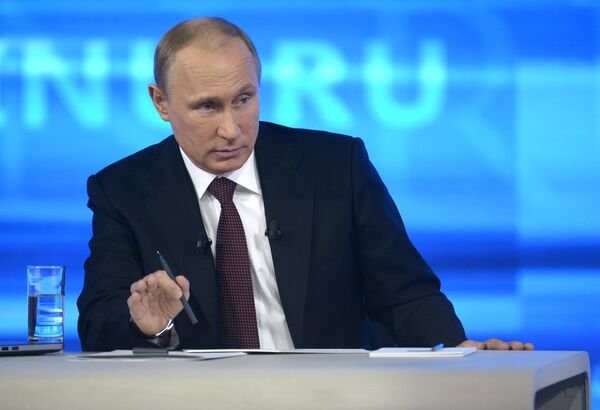 The overall number of questions exceeded 2.3 million, including 2.2 million lodged by telephone and 100,000 via the Internet. A special text message line was also available throughout the broadcast.

Direct linkups were organized with Baltiysk, Bryansk, Irkutsk, Kaspiysk, Kondopoga, Naberezhnye Chelny, Nakhodka, the village of Podgorodnyaya Pokrovka in the Orenburg Region, and Tver. Additionally, a number of questions were also asked live from Sevastopol.

On October 18, 2007, the sixth "Direct Line with President Vladimir Putin" was broadcast by the television networks Vesti, Rossiya, and Channel One.

It was the largest at that time in terms of both duration and the number of questions asked. During the 3 hours, 5 minutes and 40 seconds the session lasted, Putin answered 72 of the more than 2.5 million questions posed. As before, people mostly expressed social concerns related to improving salaries and pensions, social benefits for pregnant women and young mothers, housing, and rising food prices.

Putin Ranking as World’s Most Influential Person ‘Obvious’ – Peskov
Eight questions each were asked about the economy, international issues and domestic policy. The President also answered four personal questions, three questions about the Olympic Games, three about the army, and two about football.

The studio was connected to 67 cities throughout Russia and the CIS, with people from 12 of them getting to ask questions. Some cities even got to ask two or three questions. In all, there were 2,276,931 calls.

On December 4, 2008, Vladimir Putin held his seventh Direct Line with the citizens of Russia. This was the first time he answered questions as prime minister and the head of the United Russia party.

The session lasted 3 hours and 8 minutes, which was three minutes longer than in 2007.

Time Readers Vote Putin Most Influential Figure of 2015
Putin answered 80 questions asked by phone, text messages, and online, as well as via mobile television stations installed in Russian regions. There were 1,636,800 calls and 642,000 text messages.

The bulk of the questions concerned the consequences of the global financial crisis, rising petrol prices, pensions, social benefits and wages in the public sector, as well as maternity capital and mortgages for young families.

The program was broadcast by the television networks Rossiya and Vesti and the radio stations Mayak and Radio Rossii. It lasted 4 hours and 2 minutes and the prime minister answered over 80 of the more than two million questions that came in via phone, text messages, and emails sent to www.moskva-putinu.ru. 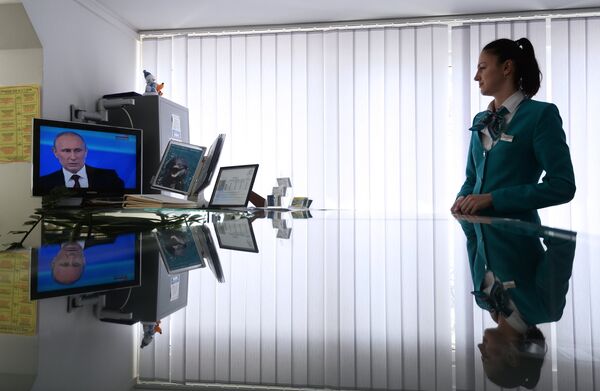 The 2009 Q&A session focused on support for industries. Putin spoke with employees of the companies he had previously visited, telling them about practical support measures and promising to visit again in the event of any problems.

The 2010 Q&A session "A Conversation with Vladimir Putin: Continued" was broadcast on December 16 by the television networks Rossiya-1 and Rossiya-24 and radio stations Mayak, Vesti FM, and Radio Rossii. It was the ninth live session and beat the previous record by 24 minutes; it lasted 4 hours and 26 minutes. Of the more than 2 million questions received, Putin answered 90 questions, 31 of which he chose himself.

Most of the questions concerned socioeconomic issues and the consequences of the devastating wildfires that had hit Russia that summer. People also asked the prime minister about preparations for the Winter Olympic Games in Sochi in 2014 and the 2018 FIFA World Cup.

Putin's Approval Rating Rises to 86 % - Independent Poll
On December 15, 2011, Vladimir Putin spent four and a half hours answering questions. About 40 percent of the television audience that day tuned into the broadcast. Putin's tenth Direct Line Q&A session began at noon and ended 4 hours and 32 minutes later. During this time, Putin answered 88 questions, 25 of which concerned parliamentary election results, the next presidential election, Russian political parties, Putin's political plans, personnel issues, and many other issues.

The "Direct Line" session was not held in 2012, but the Kremlin said they had not abandoned the format and would hold it at a warmer time of year.

With this Q&A session, Putin again broke his own record with the session lasting 4 hours and 47 minutes. The President answered 85 questions, including 24 rapid-fire questions, eight of which he chose himself and the rest were put forward by the session's hosts. During the 2013 session, the call center fielded a record number of calls; around three million calls had been received as of 4 p.m. MSK. 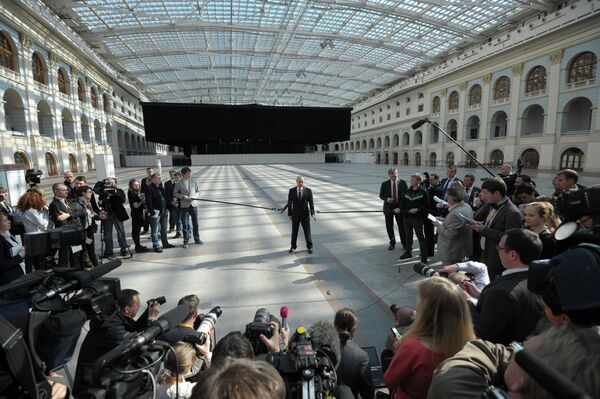 On April 17, 2014, the annual "Direct Line with Vladimir Putin" was held. This was his twelfth Q&A session overall, the second of his current presidency, and the first to involve residents of Russia's new region – Crimea. It was broadcast live by the television networks Channel One, Rossiya-1 and Rossiya-24 and by the radio stations Mayak, Vesti FM, and Radio Rossii.

The 2014 "Direct Line" lasted 3 hours and 55 minutes. Putin answered 81 questions, 35 of which concerned Crimea and Ukraine. The studio was connected with four Russian regions as well as to a studio in Berlin, which brought together international experts from the Valdai Discussion Club. Four of the questions asked during the broadcast came from Sevastopol. Putin also answered a video question from former US intelligence employee Edward Snowden.

In addition to the "Direct Line" program, the Russian president held two online Q&A sessions answering questions fielded by Internet users from all over the globe.

On March 6, 2001, Vladimir Putin held his first online Q&A session for users of the BBC News, Gazeta.ru and Strana.ru websites. Putin received more than 20,000 questions from web users, however, during the hour-long session he managed to answer just two dozen questions that the event's organizers had deemed most relevant and interesting.

The Internet audience raised a wide variety of questions on topics ranging from internal policy and freedom of speech in Russia to the future of economic reforms and democracy and from missile defense to Russia's relations with the United States and the European Union. Some users inquired about Putin's family, his passion for sports and cultural penchants, as well as his personal attitude towards the Internet. 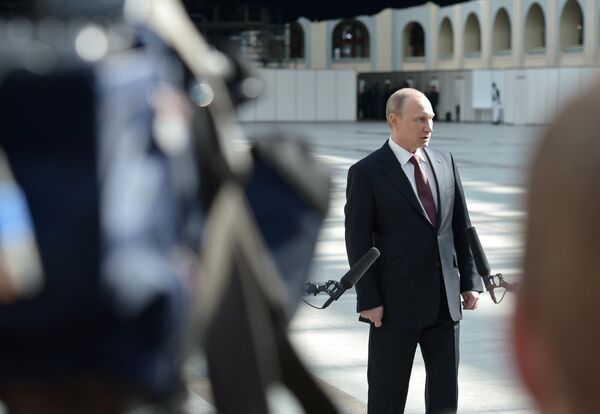 On July 6, 2006, Vladimir Putin held his second online Q&A session, which was organized in cooperation with the BBC and Russia's Yandex search engine.

In total, more than 162,000 questions were submitted by Russian and foreign Internet users, and 1,250,000 people voted in favor of previously asked questions. The session lasted 2 hours and 9 minutes. Putin answered 49 questions, most of which concerned Russia's internal problems and international affairs.