Pilot of US Capitol Gyrocopter Landing Might Be Charged - FAA 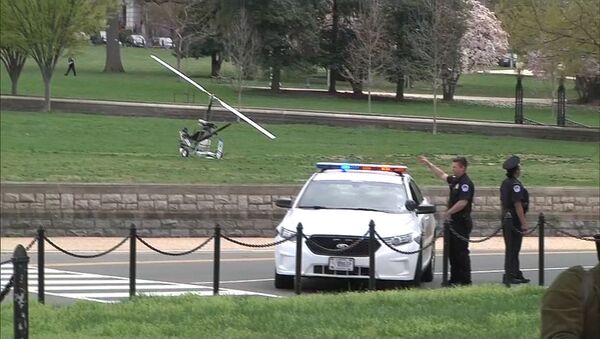 © REUTERS / Courtesy of NBC4/WRC/Handout via Reuters
Subscribe
International
India
Africa
US Federal Aviation Administration stated that the pilot of the gyrocopter that landed on the US Capitol lawn on Wednesday afternoon violated Washington, DC airspace security rules and might face penalties.

WASHINGTON (Sputnik) — The pilot of the gyrocopter that landed on the US Capitol lawn on Wednesday afternoon violated Washington, DC airspace security rules and might face penalties, US Federal Aviation Administration (FAA) said in a statement.

“The pilot was not in contact with FAA air traffic controllers and the FAA did not authorize him to enter restricted airspace,” the statement said on Wednesday. “Violators [of Capitol security rules] may face civil and criminal penalties.”

Man Arrested for Landing Small Helicopter on US Capitol Grounds
The FAA is currently investigating the incident in cooperation with its Washington, DC aviation security partners, according to the statement.

US Capitol Police arrested the pilot immediately after he landed the small helicopter on the West Lawn of the Capitol building. Local media identified the pilot as Doug Hughes, a 61-year-old mailman from the US state of Florida.

Hughes undertook the flight to Washington, DC to urge campaign finance reform and a halt to US government corruption, according to The Tampa Bay Times.

The United States Capitol building is the seat of the US legislative branch of government known as the Congress.