Majority US Citizens Believe Taxes for Low-Income Earners Too High 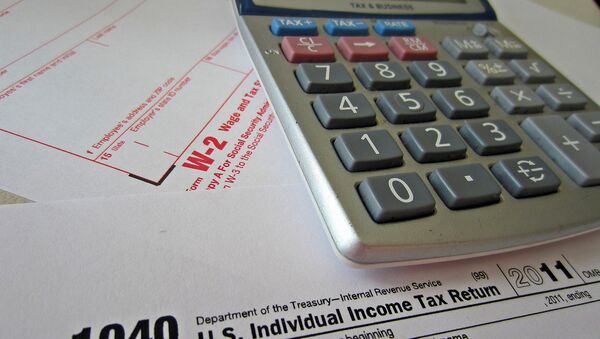 © 401(K) 2012
Subscribe
International
India
Africa
The Gallup's annual Economy and Personal Finance poll revealed that almost half of US citizens think that lower-income Americans pay too much in their federal taxes.

WASHINGTON (Sputnik) — Almost half of US citizens think that lower-income Americans pay too much in their federal taxes, the Gallup's annual Economy and Personal Finance poll found.

“Forty-five percent of US adults believe lower-income earners pay too much," the Gallup said on Wednesday. “This sentiment is up roughly five percentage points from recent years, but is still lower than a decade ago.”

The poll, conducted April 9-12, revealed that 30 percent of US citizens think low-income earners pay a fair share of federal taxes, while 21 percent argued that they pay too little.

New 'Middle Class Economics' Plan to Cut Taxes, Help Families - Obama
“The increase in the belief that lower-income people pay too much is largely attributable to Republicans, a third of whom now hold this view,” the Gallup explained.

The percentage of Democrats sharing the same view increased by 5 points from 52 percent in 2014, according to the poll.

The Gallup also found that 62 percent of US citizens think upper-income Americans pay too little in federal taxes.

US President Barack Obama and First Lady Michelle Obama have recently reported on their tax returns and revealed that they made $477,383 in 2014.

The Obamas earned 9 times more than an average US family. In 2013, the US median household income was $51, 939, according to the US Census Bureau.