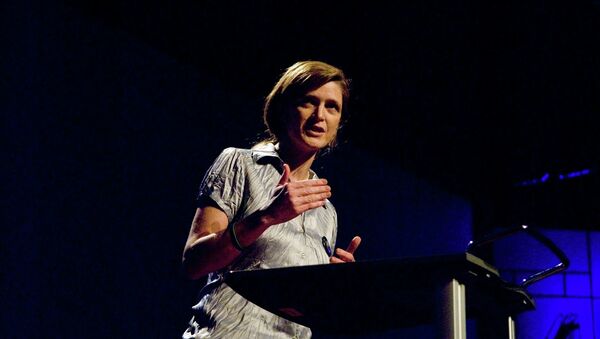 © Flickr / Andrew Heavens
Subscribe
International
India
Africa
US Ambassador to the United Nations Samantha Powers said that Washington will ensure that sanctions are reapplied against Tehran without the support of permanent UN Security Council members Russia and China, if Iran does not fully implement a final nuclear agreement.

WASHINGTON (Sputnik) — Washington will ensure that sanctions are reapplied against Tehran without the support of permanent UN Security Council members Russia and China, if Iran does not fully implement a final nuclear agreement, US Ambassador to the United Nations Samantha Powers told a US congressional hearing.

“We are going to secure an arrangement that allows for snap back in New York [United Nations] that does not require Russian or Chinese support, so we are not looking at a situation where in order to snap back we would have to do a new, separate resolution as we did in 2010,” Powers said on Wednesday, referring to the 2010 UN Security Council resolution supported by Moscow that applied additional sanctions on Iran.

We Don’t Care About Your Deal: US States Set to Maintain Iran Sanctions
Under the framework agreement between the P5+1 negotiators and Iran reached in April, UN sanctions on Iran would be lifted once it is verified Iran has complied with all aspects of the agreement.

UN sanctions will not be lifted until six to twelve months after Iran’s compliance is verified, while the United States would maintain some of its sanctions against Iran unrelated to the nuclear program, Powers went on.

Under the April 2 deal, Iran will not build new enrichment facilities or heavy water reactors for 15 years, and will also limit its stockpile of enriched uranium while abiding by enhanced transparency procedures. The number of centrifuges operating in Iran will be cut by more than two-thirds in ten years.

In return, the P5+1, comprised of the United States, France, the United Kingdom, Russia, China and Germany, promised to gradually lift all nuclear-related sanctions imposed against Iran. The UN Security Council will only partially lift its sanctions, with the existing restrictions on conventional arms and ballistic missiles as well as core UN provisions dealing with the transfer of sensitive technologies and activities to remain in place.

US anti-Iran sanctions for terrorism, human rights abuses and ballistic missiles have not been cancelled.

The final agreement between Iran and the P5+1 group of countries is set to be achieved by June 30, 2015.