Anti-Russia Sanctions Unjust, Should Be Eliminated - US Investor Rogers 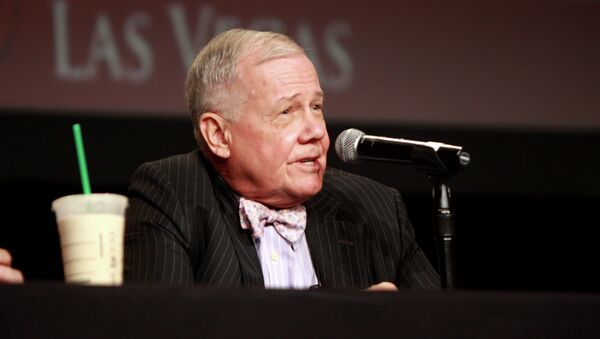 According to legendary US investor Jim Rogers, anti-Russia sanctions over Moscow's alleged involvement in the Ukraine conflict should be removed because they are unfair.

"The sanctions are unjust and an injustice," Rogers said in an interview. “Russia should not have been affected by sanctions at all because it was America that started that coup and then turned around and blamed it on Russia."

He added that economic sanctions currently in place against Russia hurt common people more than the government.

The veteran US investor stressed that US companies are not as affected as European firms, because the United States is not as economically tied to Russia as is Europe.

"It is forcing Russia and Asia closer and closer together, which is going to hurt America and Europe in the long term. It is going to be good for Russia and for Asia."

"If these measures [arms withdrawal from Ukraine] continue in a positive way, then the sanctions may be lifted fairly soon. And if that happens, I assure you the stock market is going to go up a lot. And the ruble will go up," Rogers explained.

Investing in the Russian ruble may be very profitable under current economic conditions.

"If somebody wants to make a lot of money, something like the ruble may be the way to go because it is down so much. And if things do get better, which I expect, the ruble may very well rally," the investor said.

He emphasised that Europeans are eager to remove the "unjust" economic sanctions against Russia:

Since the Ukrainian conflict escalated in April 2014, the European Union and the United States have imposed several rounds of sanctions against Moscow, blaming it for meddling in Ukraine's internal affairs, a claim Russia has repeatedly denied.

Western leaders link the duration of sanctions to the complete fulfillment of the February Minsk agreement negotiated by the leaders of Russia, France, Germany and Ukraine. The deal includes a ceasefire and the withdrawal of heavy weapons.

Rogers told Sputnik he will step up investment in the Russian stock market, amid favorable market conditions.

"Will I increase my investment [in Russia]? Yes,” Rogers said. “I am investing now, and have been [investing]."

Rogers’s portfolio includes shares in the Moscow Stock Exchange, as well as in the Russian fertilizer company Phosagro and the Russian airline Aeroflot.

"People have to make their own decisions. I make many mistakes, I do not know if I am right or wrong, but I am investing in Russia now," Rogers said.

The prominent investor explained that Russia has many strengths compared with other countries, such as vast assets, insignificant debt, and a convertible currency.

"Russia is one of the few [states] that has low debt and big reserves, so there are many advantages to Russia given that the stock market is down a great deal and it is not very popular with investors," Rogers concluded.

Positive changes in the Russian government and Moscow’s promotion of foreign investment is a good signal for international financiers, legendary US investor Jim Rogers told Sputnik.

The investor said that positive changes have taken place in the Russian government, which makes the country more attractive for foreign capital.

The financial commentator was pessimistic about the Russian market for almost half a century. After a trip to the Soviet Union in 1966, Rogers thought that investment in Russia "would never work."

"It has only been in the last couple of years that I have changed my view of Russia and that is because Russia has changed," Rogers noted.

The Russian stock market has shown impressive dynamics since the beginning of the year, and will continue its growth throughout 2015 and possibly in 2016, Jim Rogers told Sputnik.

"Russian stock market is up nicely this year, which is good for me, obviously," said Rogers, who owns numerous Russian stocks, adding that the market is most likely to continue rising this year and "maybe even into next year."

"Russia is a country with vast assets, it is not a big debtor nation, it has a convertible currency, so it has many strengths compared to many other countries in the world these days."

Jim Rogers is a prominent investor and international financial commentator. In the 1970s he founded the Quantum Fund with billionaire George Soros. Currently based in Singapore, he is the chairman of Rogers Holdings and Beeland Interests, Inc.