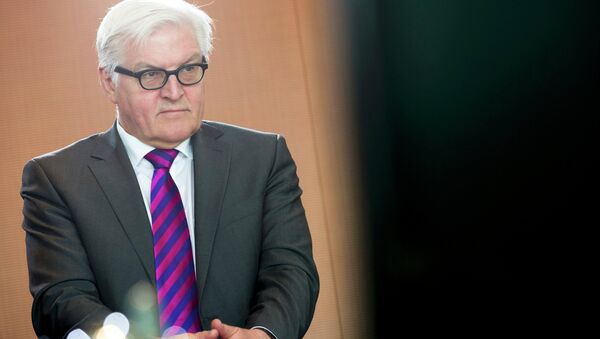 The foreign ministers of the Group of Seven (G7) countries announced that they welcome a UN Security Council resolution making arms sales to Houthi militants in Yemen illegal, the German foreign minister said Wednesday ahead of a G7 ministerial meeting in Lubeck.

G7 Protests: German Police Arrest 16 Anti-Capitalists at Lubeck Demo
LUBECK, April 15 (Sputnik) – On Tuesday, the UN Security Council (UNSC) voted to approve a draft resolution banning the supply of arms to Houthis in Yemen. A total of 14 UNSC member countries voted for the document, while Russia abstained. The resolution was introduced by Jordan, the United Kingdom and the United States.

"We very much welcome the adoption of the UN Security Council resolution banning the supply of arms to Houthis. The adoption of this resolution was possible thanks to the constructive position of China and Russia," Frank-Walter Steinmeier said.

The draft resolution provides, among other things, the freezing of accounts and a ban on travel for a number of Houthi leaders, as well as banning arms supplies on those acting on their behalf or at their direction.

The document calls upon UN member states, in particular those neighboring Yemen, to inspect all cargo transiting their territory to the crisis-hit country, especially when there are serious concerns that the cargo may contain weapons.

Earlier in April, Russia submitted a draft resolution to the UN Security Council, calling for a "humanitarian pause" in the conflict, an immediate ceasefire and a provision ensuring that the arms embargo also include the government of the Yemeni President Abd Rabbuh Mansur Hadi.

The humanitarian pause was not included in Tuesday's UN resolution, but the resolution noted that the deteriorating humanitarian situation and denial of access to humanitarian assistance could constitute violations of international law.

Russia's envoy to the United Nations Vitaly Churkin said that the arms embargo in Yemen must be comprehensive, adding that during negotiating the resolution on arms embargo on the Houthis constructive proposals made by the Russian delegation were not considered properly. In particular, the authors of the approved resolution refused to affix Russian requirement to all parties that a cease fire and dialogue begin immediately.

In late March, a Saudi-led international coalition began bombing Houthi positions in Yemen, after they took control of the country's capital Sanaa, following a request for military help from Hadi, who had fled Yemen in fear of his life.

Several hundred civilians have been killed in the Saudi-led airstrikes as the UN has warned of a humanitarian catastrophe.