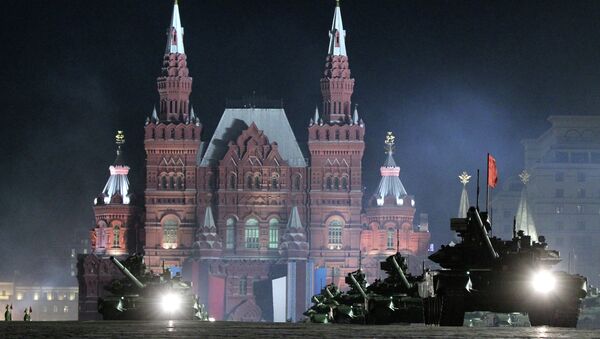 Sputnik offers a preview of the all-new Russian military tech to be unveiled on Red Square on Victory Day. Warning: Massive spoilers!

In less than a month, Moscow is set to hold a massive military parade in honor of the 70th Anniversary of Victory in the Great Patriotic War. For a variety of reasons, the parade is shaping up to be the grandest in recent memory, and certainly the greatest in Russia's post-Soviet history. A great deal of diplomatic, military and historical street cred is certainly riding on the event.

Presently, the parade's vehicle and armor portion looks to be among the event's main highlights. Excitement and pride at home and nervous nail-biting anticipation abroad have been building since February, when Russian Deputy Prime Minister Dmitri Rogozin stated that this year's parade will feature all-new equipment presently being delivered to Russia's Armed Forces. Although defense officials have been tight-lipped about the new machines, to the point where they have been conducting practice runs of the parade with the tarps still on the vehicles, there’s plenty we do know about the new machines to be featured in the parade's mobile column. Ultimately, the parade will feature a total of seven vehicles never before seen on Red Square, plus over half-a-dozen vehicles deployed to the Russian Armed Forces over the last ten years.

The new Armata platform-based T-14 Main Battle Tank (Object 149) is looking to become the star of the show for the parade's mechanized portion. In development since 2009 at Uralvagonzavod, the tank, comparable to the latest Western analogues and in some measures superior, reportedly features an unmanned remotely controlled main turret, is armed with a brand new 125 mm smoothbore cannon, has a fully automatic loading system, a crew compartment separated from the ammunition container, and composite multilayered armor protection. Set to undergo state trials in 2016, Uralvagonzavod is expected to supply over 2,300 of the new tanks to the military by 2020. 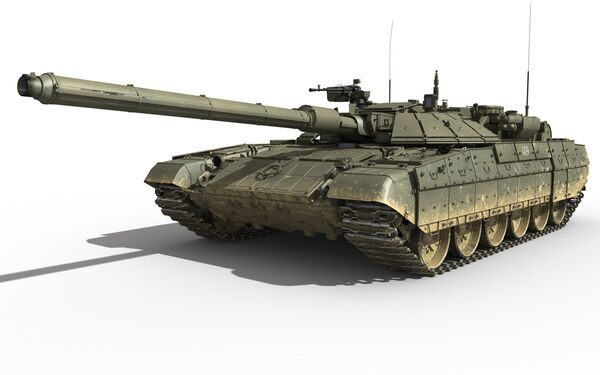 The all-new 2S35-SV Koalitsiya self-propelled howitzer, shaping up to be the successor to the 2S19 Msta-S (a late-1980s design also to be featured at the parade) is also based on the next-gen Armata platform. Little else is known about the vehicle. Experts have written about initial plan to create a double-cannon version of the machine, but there is evidence to suggest that the plans were later abandoned. What we do know is that the 152-mm and 155mm caliber howitzer is capable of hitting ground targets at a distance of up to 70 kilometers using precision-guided rounds. Sources indicate that the vehicle will feature automatic targeting and charge selection.

The new Boomerang armoured personnel carrier (VPK-7829) is set to replace the BTR-82/A, a heavily modernized variant of the 1980s-designed BTR-80, which features improved armor, a new engine, night vision and advanced communications systems. Designers and military spokesmen have been tightlipped regarding the machine, although it is claimed that the new design will be "nothing like any of the modern APCs." The 8x8, front-engine design features ceramic armor technology, including anti-tank grenade and anti-mine protection, has a crew of three, and can be fitted with a 30 mm anti-materiel or armor-piercing cannon, a 7.62 mm or 12.7 mm machine gun. In addition to its role as a troop carrier, the multi-role vehicle will be capable of serving as an anti-tank missile carrier, an air defense missile launcher, an armored ambulance, a command post vehicle, a fire-support vehicle and a mortar carrier. Speaking to Russian military news hub Zvezda, military expert Ilya Kramnik explained that "the protection levels of the Boomerang APC will be much higher [than its predecessors]. This is ensured by the special shape of the vehicle's bottom and the internal layout, in particular, the suspension of crew seating toward the vehicle's ceiling." 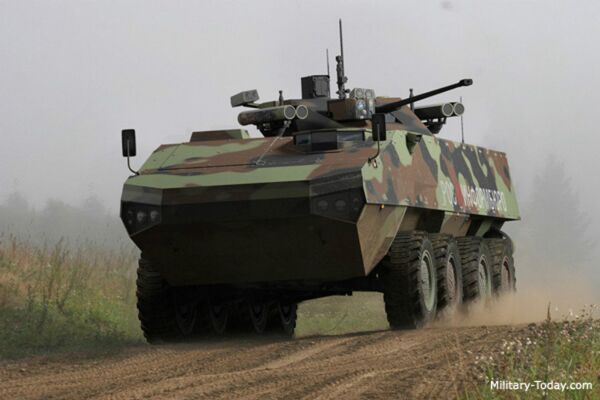 The Kurganets-25 BMP infantry fighting vehicle, another new APC based on the Armata platform, is set to replace a number of its BMP, BMD and MT-LB armored track platform predecessors. Developed from scratch, the new design, with a crew of three and room for up to 7 passengers, features improved crew compartment conditions, new Drozd-2 active protection, new countermeasures against guided anti-tank missile systems, and a slew of interchangeable components and subsystems enabling the tailoring of protection and armament with specific threats in mind. The vehicle features a new automated fire control system, and is armed with a 30-mm cannon, a coaxial 7.62-mm machine gun and the new Kornet-EM anti-tank guided missile launcher. Full scale production of the Kurganets-25 is set to begin in 2016. Like the Bumerang, the Kurganets will be capable of multiple roles in addition to its personnel carrying role. 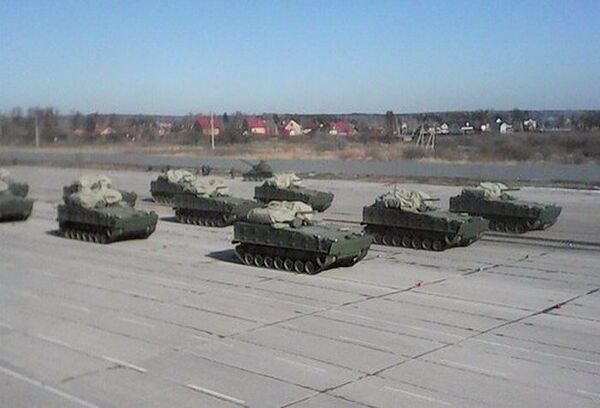 The BTR-MD Rakushka multipurpose APC, designed especially for use as an air assault transporter for airborne forces, is based on the BDM-4 chassis, first introduced to the Russian military in 2004. The air-drop capable vehicle is fully amphibious, and features an aluminum armor hull, NBC protection and automatic fire suppression, along with new electronic control and navigation systems. Capable of carrying up to 13 persons, the vehicle is armed with a 7.62mm automated machine gun, along with a Tucha 81 mm smoke grenade launching system for screening protection. 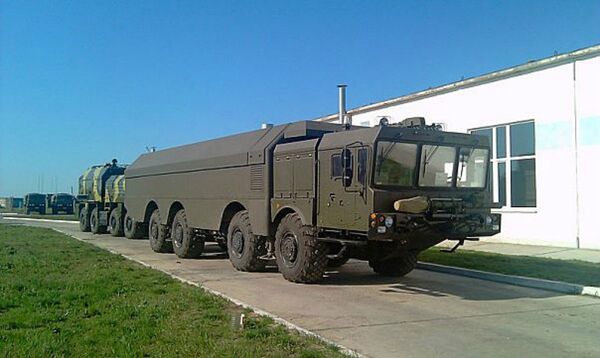 The mobile coastal defense missile system Bastion-P, developed by Russia's NPO Mashinostroenia along with Belarusian firm Tekhnosoyuzproekt, is capable of deploying the 300km ranged Yakhont anti-ship cruise missile in under five minutes. The defense platform is capable of destroying nearly all classes of ship, including carrier groups. Military expert Alexander Mozgovoi told Zvezda that the Yakhont cruise missiles "are supersonic, traveling at a speed of Mach 2.6. The highly maneuverable missile is capable of a complex flight path, capable of traveling to a height up to 15,000 feet, then swooping down to a height of 10-15 meters above sea level. The missile is difficult to detect against waves by radar. When the first rocket locks onto its target, it transmits information to others. In this way, the missiles agree on their targets among one another."

2015 will also mark the first appearance of the Ural Typhoon U multifunction mine resistant armored vehicle. The 6x6 armored truck, capable of resisting 14.5 mm armor piercing bullets and up to 8 kg of explosives, was designed in 2010, and went into production last year. The vehicle has a crew of 3 and is capable of carrying up to 16 passengers, and can be equipped for use as a command vehicle, for communications, engineering, radiation, chemical and biological recon, in addition to roles as a troop and supplies transport. The vehicle can be mounted with a 7.62 mm or 14.5 mm HMG. 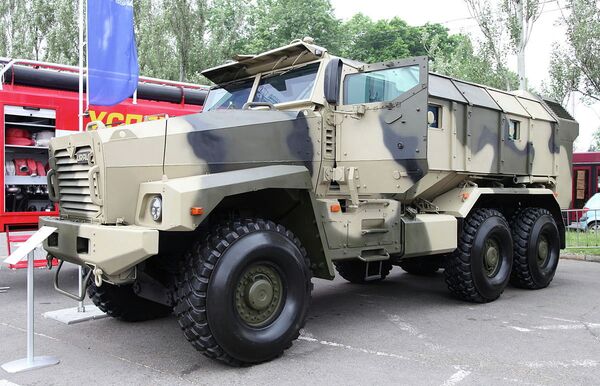 The RS-24 Yars MIRV-equipped intercontinental ballistic missile, first deployed in 2009, will show its face to the world for the first time at this year's parade, carried on the 16-wheeled Kamaz mobile transporter. Capable of carrying at least four and up to ten independently targetable warheads, the RS-24 Yars was developed as Russia's response to US plans to develop and deploy a missile shield in Europe. 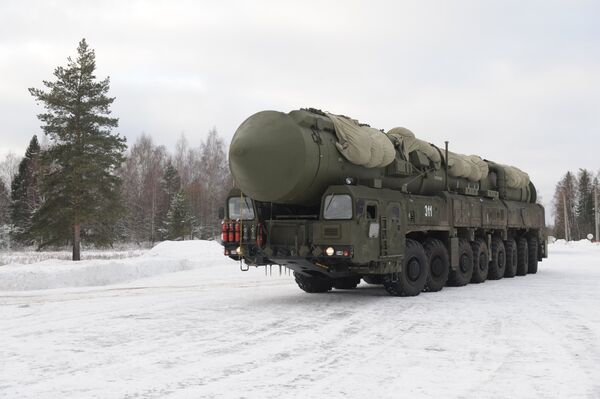 Prior to moving on to the contemporary tech, the parade will be opened by a column of the legendary wartime T-34 tank, along with a unit of the fearsome Su-100 tank destroyer. Alongside the brand new tech listed above, most of the machines to be featured in this year's parade have been developed and deployed to the Russian armed forces within the last decade, including the GAZ-Tigr 4x4 infantry mobility vehicle (mounted for the first time with the Kornet D/EM antitank missile system), the Kamaz Typhoon multi-function mine resistant MRAP, the S-400 Triumf anti-aircraft system, the Patsir-S1 anti-air missile and artillery system, and the 9K720 Iskander short range ballistic missile system. 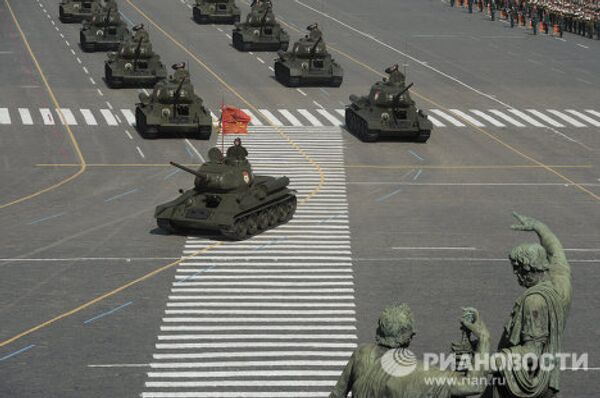 A column of T-34 tanks, here seen participating in the 65th anniversary of Victory in the Great Patriotic War, 2010. The parade's historical portion reminds viewers of the historical origins of the Great Victory they are celebrating.
© RIA Novosti . Sergey Guneyev
/
Go to the photo bank

Commenting on the importance of the armored column portion of the parade, military analyst Viktor Litovkin told Zvezda that "this will not just be a mobile column pass by. It will serve as the evidence that our defense industry and our army have made a breakthrough, proving that we are introducing new combat equipment, superior to its Western analogues. This parade will instill a sense of confidence in the fact that the victory bestowed upon us by our veterans –our fathers and grandfathers, will be defended."