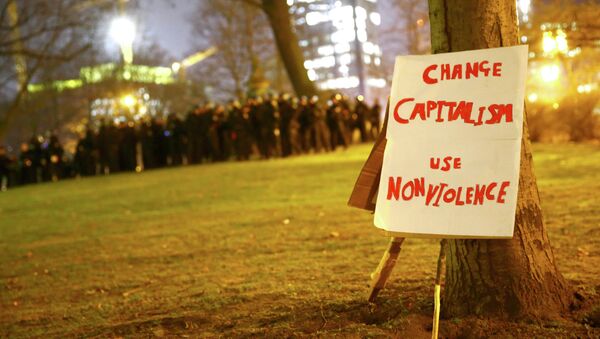 According to a police spokesperson, the authorities arrested 16 anti-capitalist activists who came to the northern German city of Lubeck on Tuesday to protest against a G7 meeting.

Kerry to Attend G7 Meetings in Germany Next Week - State Department
LUBECK (Sputnik) – Police arrested 16 anti-capitalist protesters who came to the northern German city of Lubeck on Tuesday to protest against a meeting by the Group of Seven (G7) foreign ministers, a local police spokesperson said on Wednesday.

"16 people were detained by police while trying to break through the ring of encirclement, they were released later", the police spokesperson told RIA Novosti.

He added that nobody was injured during the incident.

According to the spokesperson, water cannons and other police equipment will not be removed from the center of Lubeck until the end of the G7 event.

The demonstration, which took place on Tuesday, was attended by about 1800 protesters.

The purpose of the protest was to express a "rejection" of the G7 group, whose member nations – some of the world's largest economies – are seen as mistakenly considering global problems through a prism of their own economic, political and military objectives, the Germany-based Stop G7 group said on its Facebook page.