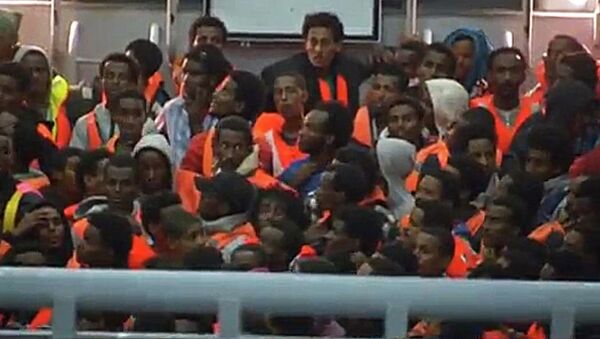 The EU Commissioner for Migration said that the rapidly increasing number of immigrants, including refugees rescued from the Mediterranean Sea, should prompt the European Union to come up with a new adaptive strategy.

MOSCOW (Sputnik) – The rapidly increasing number of immigrants, including refugees rescued from the Mediterranean Sea, should prompt the European Union to come up with a new adaptive strategy, the EU Commissioner for Migration has stressed.

“We have to understand that … the unprecedented influx of migrants at our borders and in particular, refugees — is unfortunately the new norm and we will need to adjust our responses accordingly,” Avramopoulos told EU lawmakers on Tuesday.

More Migrants Could Drown in Mediterranean Amid Regional Conflicts
He added that according to estimates of the Frontex EU border control agency, more than 7,000 immigrants have reached EU borders over the past several days.

In March, the European Union voiced its plans to reduce the deals with North African countries, such as Egypt, Tunisia and Libya, to train its search-and-rescue missions, so as to diminish the immense number of illegal immigrants trying to get to the European shores.

The radical proposal came as Italy voiced its concerns about the excessive refugee inflow from the Mediterranean.

In 2014, approximately 280,000 undocumented migrants entered the European Union, mainly from such countries as Libya, Syria and Somalia. In addition, more than 170,000 migrants were rescued in the Mediterranean region and later transferred to Italy.

In the first two months of 2015 the immigrant inflow figures were two times as high as those of January-February, 2014.