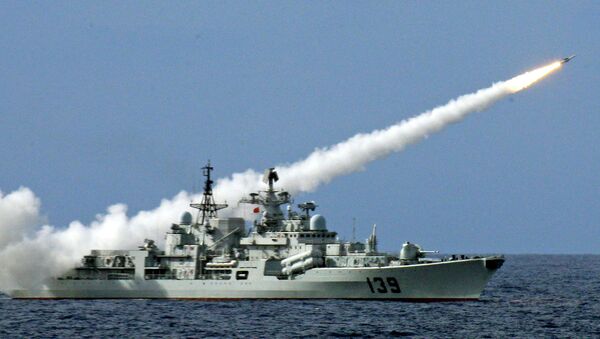 A recent report from the Office of Naval Intelligence (ONI) has confirmed the Chinese government's own claims that "the newest class, the LUYANG III, destroyer is fitted with the new vertically-launched YJ-18 ASCM [anti-ship cruise missile]."

The revelations about the the YJ-18 — a latest generation supersonic ASCM — are one of the major takeaways of the ONI's overview of the developments in the People's Liberation Army Navy (PLAN).

So far there is only one Luyang III (also known as a 052D) destroyer  with the proper vertical launch system (VLS) for the YJ-18 but China has said it plans to have 10 more operational by 2017.

"This missile, and its air-launched cousin, the YJ-12, are major threats to the U.S. Navy," Lyle J. Goldstein, an associate professor in the China Maritime Studies Institute at the United States Naval War College, told the New York Times. "The major increase in speed makes the missile much harder to intercept."

The ONI report also says the missile is being deployed on three classes of the PLAN's submarines: Song-, Yuan-, and Shang-classes.

"Everyone serious about understanding Chinese military capabilities must familiarize themselves with this missile," writes Andrew Erickson, associate professor at the US Naval War College in Rhode Island.

The increased speed and range of the missile, Erickson adds, "together with a sea-skimming flight profile and likely possession of a command data link based on Internet photos, could make the YJ-18 extremely difficult to defend against."

Chatter about the threat posed by the YJ-18 increased late in 2014 as a video surfaced on state-run CCTV purporting to show a test-launch of the missile.

Previously, China relied on Russia for it's missiles, and the YJ-18 is described as an indigenous version of the Russian 3M54E Klub.

The ONI report — the first unclassified assessment on China since 2009 — paints a picture of a PLAN that is improving more on a qualitative basis than in terms of sheers numbers, but even so, some of the numbers — especially the build up of the Coast Guard  - are noteworthy.

The PLAN currently comprises 300 surface combatants, submarines, amphibious ships, and missile-armed patrol craft. In 2014, 60 new vessels were added to the fleet, and a similar number is expected for 2015. Chinese shipyards produced more naval ships than any other country's during 2013 and 2014.

The Chinese Coast Guard — which has been referred to as "China's Second Navy" — will have increased by 25% between 2012 and the end of 2015, faster than any other coast guard in the world, according to the report.

"Major qualitative improvements are occurring within naval aviation and the submarine force, which are increasingly capable of striking targets hundreds of miles from the Chinese mainland," the report said, concluding that overall, "it is emerging as a well equipped and competent force."