Russian Humanitarian Convoy to Depart for Donbas on Thursday 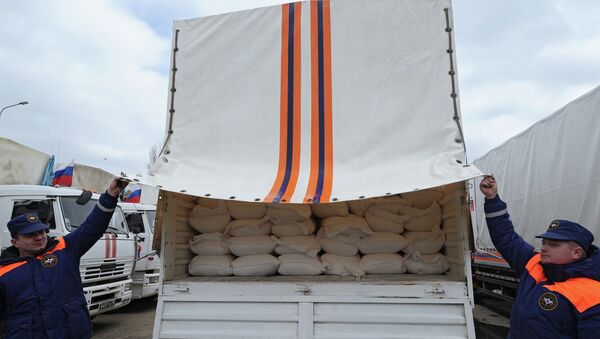 © Sputnik / Sergey Pivovarov
/
Go to the photo bank
Subscribe
Russian Emergencies Ministry announced that Russia is sending yet another convoy to southeastern Ukraine to help local residents survive through a humanitarian crisis.

MOSCOW (Sputnik) – Russia is sending yet another convoy to southeastern Ukraine to help local residents survive through a humanitarian crisis, a representative of the crisis management center with the Russian Emergencies Ministry has announced.

"The 24th convoy with humanitarian aid for the Donetsk and Lugansk regions is being formed on the territory of the Donskoy rescue center in the Rostov Region. It will be ready on April 15 after all cargo is packed and registered," the representative said on Wednesday, adding that the convoy will head for Donbas on April 16.

Russia Sends 23rd Humanitarian Aid Convoy to Eastern Ukraine
The humanitarian aid that it will deliver to southeastern Ukraine includes food, medicine, building materials, as well as textbooks for higher educational institutions located in Donbass. The aid is being brought to the Rostov Region from various parts of Russia.

Overall, Russia has delivered over 30,000 metric tons of aid to the people of Donetsk and Lugansk since August, 2014.

Donbass residents are on the brink of a humanitarian catastrophe because of the military operation that Kiev launched in southeastern Ukraine in April, 2014, to suppress local independence supporters who refused to recognize the coup-imposed Ukrainian government.

In addition, the region has been suffering from an economic blockade imposed by Ukrainian President Petro Poroshenko in November, 2014, which led to all state-funded health, educational and social protection organizations having been withdrawn from Donbass.