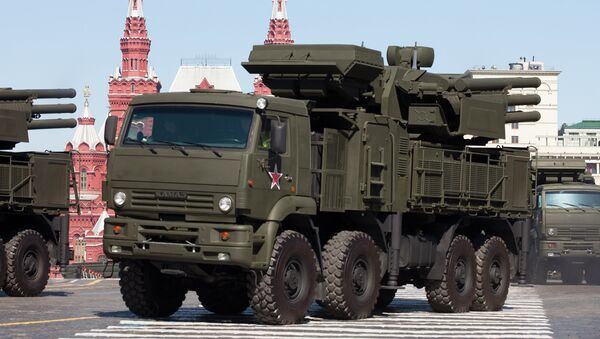 The Pantsir is typically mounted on a wheeled chassis, however its maneuverability in the heavy snow is "significantly restricted," Vladimir Popov, director general of the KBP subsidiary JSC Scheglovsky Val, told the TASS news agency.

He added that the idea of basing the Pantsir on the special tracked chassis produced by the JSC Ishimbayskiy machine-building plant was being studied and that some follow-up experiments were also planned to test its viability in polar areas.

Popov said that KBP had previously integrated Pantsir's combat module and radar on the tracked GMZ-352M1E chassis produced by the JSC Minsky track plant for the United Arab Emirates.

The director general also said that KBP was working to increase the Pantsir's reliability in severe climate conditions.

"Icing-up is the main problem," he said. "We are improving both the chassis' reliability and the frost-resistance of different oils and power fluids.

The Pantsir system is already “protecting Russia's northern borders," he said, adding that "three serial-wheeled SA-22s have been deployed at the Temp air base (on Kotelny Island) since 2014."

The operating temperature range of the Pantsir modification for the Russian armed forces runs from negative 50 degrees to 50 degrees.

Bolstering Russia’s presence in the Arctic region is part of the country’s military strategy through 2020. President Vladimir Putin said in late 2014 that Russia is not planning to militarize the Arctic, but is taking necessary measures to ensure its security in the region.