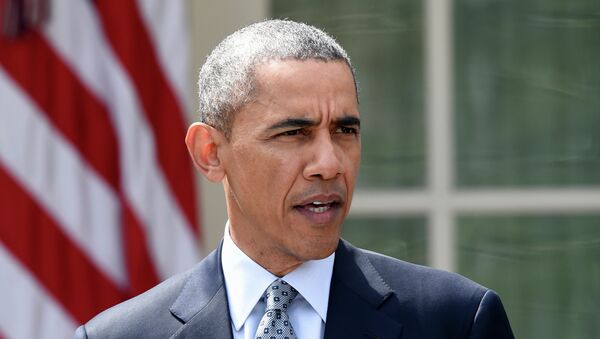 “The proposal that had been put forward… is a reasonable one, and does reflect, along with other changes that we have called for, the kind of compromise the President [Obama] would sign,” Earnest said in a press briefing.

On Tuesday, members of the US Senate Foreign Relations Committee reached a compromise and advanced the Iran Nuclear Agreement Review Act that would allow the US Congress to reject or approve a nuclear deal with Tehran.

US Senate Committee Advances Iran Nuclear Agreement Review Act
The final version of the legislation was prepared after a “substantial number of conversations between senior White House officials, other senior members of the president’s national security team and Democrats and Republicans on the Senate’s Foreign Relations Committee,” Earnest added.

The White House had said previously Congress should not vote on any legislation that could affect the outcome of the Iran nuclear negotiations set to be reached by June 30, 2015.

Earnest argued that the Obama administration has changed its approach to the legislation because the new version of the bill addresses many of the concerns that could undermine the US ability to reach an agreement with Tehran.

On April 2, 2015, the P5+1 group of countries, including the United States, France, Russia, China and the United Kingdom plus Germany, reached a political framework agreement with Iran aimed at guaranteeing the peaceful nature of Tehran’s nuclear program. The framework agreement will be followed with a comprehensive technical agreement set to be reached by June 30, 2015.