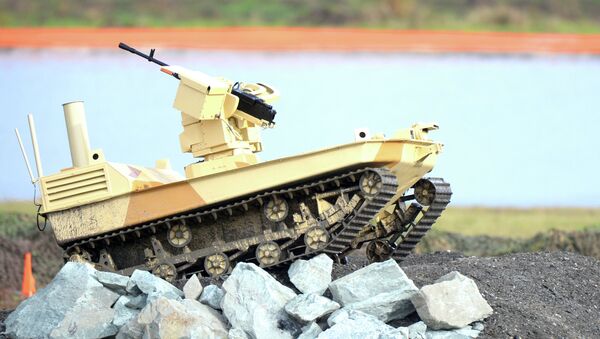 © Sputnik / Pavel Lisitsyn
/
Go to the photo bank
Subscribe
The chairman of a robotics-oriented nonprofit claims that contrary to popular belief, Lethal Autonomous Weapons Systems, also known as "killer robots," will not have the edge over human combatants, and can actually make things worse by starting accidental skirmishes.

MOSCOW (Sputnik), Anastasia Levchenko – Contrary to popular belief, Lethal Autonomous Weapons Systems (LAWS), also known as "killer robots," will not have the edge over human combatants, and can actually make things worse by starting accidental skirmishes, the chairman of a robotics-oriented nonprofit told Sputnik on Tuesday.

Currently, more than 40 robotics experts, campaigners and analysts from a dozen countries are at the United Nations in Geneva, seeking to work out the technical and legal aspects to the production of LAWS.

UN Conference on 'Killer Robots' in Favour of Ban on Production - NGO
"We do not believe that LAWS can offer advantages over human combatants," Noel Sharkey, chairman of the International Committee for Robot Arms Control (ICRAC), told Sputnik in an emailed statement.

Sharkey told Sputnik there is an opinion that the modern battlefield is becoming too fast for humans to process and make adequate decisions, which has led some to believe that autonomous weapons are required to counter enemy autonomous weapons.

"However, the interaction of hostile LAWS is scientifically unpredictable. High speed interaction, much like the wall speed flash crash, could cause very severe consequences such as accidental armed conflict that would happen too fast to be interrupted in time," Sharkey warned.

LAWS are defined as weapon systems designed and built to select and fire upon targets without human intervention. The potential development of fully autonomous weapons has raised concerns over the incompatibility of such new technologies with the human ability to value life.