The Cost of a 'Bright Future' in a Primitive Cave 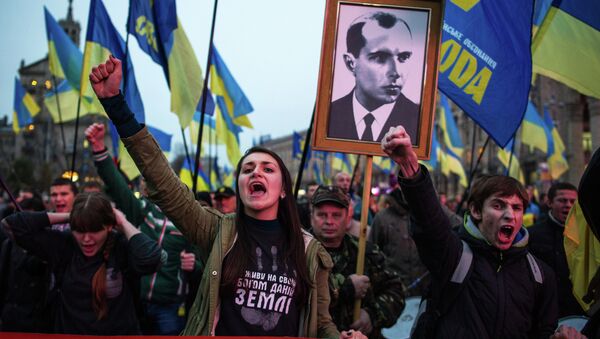 Olga Zinovyev — What price will have to be paid by the rest of the world, which reluctantly goes along with Washington's severe sanctions on Russia? This topic deserves close scrutiny by professionals from all fields, including economists and politicians, environmentalists and psychiatrists.

It's clear what price the European Community will have to bear for "voluntarily" taking direction from a police baton across the ocean. The non-G-8 states have already been warned: should they remember for a moment that they are sovereign and independent nations, they will get a stern talking-to, just like the bombing of Yugoslavia, shooting civilians in Iraq and Syria, or being denied to make their own gold reserves available to them as happened to France and Germany… Langley experts and White House advisors have plenty of interesting tales to tell.

The western and semi-western world, such as Ukraine, the Baltic states and former CMEA countries, will have a bright (and warm) future with shale gas provided by Uncle Sam. Uncle Sam never jokes about serious matters. If he says he will keep someone warm, then that's what he'll do, no matter how. Even if producing the gas involves destructive, toxic and nature-killing methods. If the Americans ignored the Kyoto Protocol 15 years ago, why should they give up their principles today? However, if you come to think that they have to reduce the European population in order to free up some land for the world's leading country, which is responsible for ensuring peace, democracy, order and justice in our world, then your heart will go out to these self-forgetful and altruistic antipodes.

The West, the semi-West and other such "no big things" like China or India understand that if the United States decided there must be peace in Ukraine, then there would be. Because it will fight by proxy on a foreign territory for peace until nothing is left standing. It doesn't matter what the price will be, or who will pay it. What matters is that these self-defenders and the bull-headed dissenters must die under tanks and phosphorus bombs, so as to never again get in the way of the progress and independence delivered by America — a tireless busybody responsible for all the political and economic hotbeds of tension on our planet!

Who is to blame for all the troubles that have befallen the world community? If the Poroshenko-led government is not responsible for the civil war in Ukraine and the cannibalistic "peaceful" decisions, the staunch liberals simply have to point the finger at the Soviet Union which allegedly created an "artificial" state of Ukraine.

An unpleasant question arises and lingers like a nagging toothache which will sooner or later have to be answered at the International Tribunal: Who is responsible for imposing the fascist regime on Ukraine and propping it up? Who will answer to civilization for inciting Ukraine to create a mono-ethnic state which, translated into the language of their barbaric acts and actions, means creating a ghetto state or a reservation in the heart of the civilized Europe? Who will answer for the economic collapse that is being fanned in Europe? Clearly, the same people who want to shift the blame on the Soviet Union and Russia (notice that our country is blamed for all the seismic-historic processes on Earth starting with the Ice Age!). These people will have to show the resourcefulness of a magician, or better yet a con man running a shell game, in order to reconcile the stubborn facts. According to the Ukrainian-American logic, the Odessa House of Unions set itself on fire; Donetsk, Lugansk and Slavyansk dropped bombs on themselves and shelled themselves from ground mortars; and the refugees fled to the warmongers in Russia… or just went to visit their Grannies.

All the reporters and cameramen blacklisted by enlightened Ukraine and the West, as well as the State Duma deputies, members of the Presidential Administration, artists — everyone, without exception — are warmongers plotting against this peaceful and independent nation that is being robbed by Russia. To add insult to injury, Russia denied its gas to those remaining Ukraine's citizens who were not yet squashed by the tanks…

It's hard to maintain the image of holy peacemaker which the United States relentlessly peddles to the world, cluttering up the global media and cyberspace with putrid propaganda. It has to eavesdrop and spy on its friends, and put Baron Munchhausen to shame with all the lies it tells. But the Baron was a nice fellow who told tall tales and funny adventures where no one was hurt, and they were fun to listen to. But the "adventures" that Uncle Sam is trying to impose on the world community are frightening for their chaos and brutality and for the manic certitude that the Earth rests on three American elephants: the American notions of freedom, independence and a thick hamburger.

And they are all hungry, especially after such — for lack of a better word — mind-blowing economic and political sanctions against Russia. One can't help but marvel at the narrow-mindedness of those who initiated the sanctions. They operate on the logic of the joke, "I don't mind my barn burning down as long as my neighbor's cow dies in fire."

These are my sad reflections on the "bright future" that awaits those who dig a hole for others and forget that in a dark cave with hungry tigers, some people may fell prey to their own brutality, and there will be nothing glorious about their death.

Poorly heated and dimly lit Europe may well fall into one of the economic and political sanction pits dug to ensnare Russia. Meanwhile, Russia will have plenty of light and heat, for it is responsible to its citizens and to the international community for all its actions and its behavior, which, unfortunately, is something I can't say about the responsibility and legal capability of the Old World and the New World.

The prescription for mass psychosis that was administered to the jumping crowd of tens of thousands of Ukrainians trying to demonstrate that they are not Moskals proved to have lots of side effects and a fairly wide contagion range.

It looks like an expert psychiatrist is needed, all the more so since the patient is the part of the Western world that is already in its twilight years. There are a bunch of disorders waiting to be diagnosed, such as megalomania, memory lapses, a persecution complex, uncontrollable spending and an addiction to destruction — the destruction of the Russian world, which doesn't need any bloodthirsty instructions from the Big Brother.

Therefore, my right-thinking friends went back to their homes in Germany, Brazil, France, Greece and Italy with St. George ribbons attached to their backpacks and are planning their next trips to Russia.