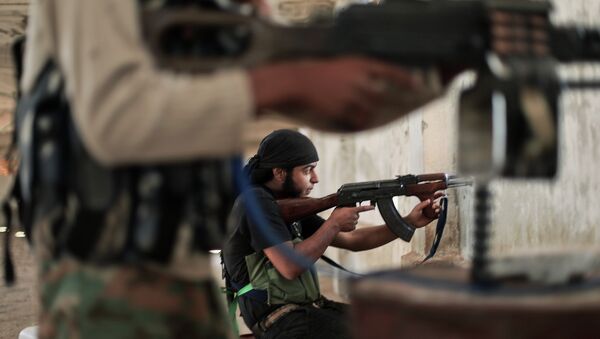 © AFP 2021 / AHMED DEEB
Subscribe
Sweden's security officials admit they have not got the tools to prevent Swedish nationals from joining the Islamic State in Syria and Iraq; according to some estimates, over 6,000 Europeans are now fighting in the Middle Eastern war zone.

Fredrik Milder, a spokesperson for the Swedish security service SAPO has told The Local that there was "very little" the agency could do to to halt the flow of Swedish nations to war zones in Iraq and Syria.

"About 50 of those known to have travelled to Syria have returned to Sweden. They travel to Syria, return to Sweden and tend to go back again," SAPO spokesperson Fredrik Milder revealed.

"There is only very little we can do to stop people from travelling from Sweden to join al-Qaeda inspired groups," he added.

According to the Swedish security service, at least 150 Swedish nationals have fled the country to join the Islamic State and other extremist fighters in Syria and Iraq. About 35 are believed to have been killed in the Middle East.

Anonymous Posts List of ISIL Websites and the US, UK Firms That Host Them
Mr. Milder pointed out that Swedish authorities were monitoring those individuals who were involved in the recruitment of would-be fighters; those who were feared to leave the country for Syria and Iraq to join Islamists were interviewed by officials, according to SAPO.

Earlier France's Prime Minister Manuel Valls also expressed his deep concerns about the growing number of European Islamist insurgents. There are almost 3,000 Europeans fighting alongside Islamic State extremists, but in the coming months this number could reach 5,000 and soar to over 10,000 before the end of the year, the politician stressed in an interview with a national radio station.

However, EU Justice Commissioner Vera Jouriva has already revealed that the true number of European jihadists fighting in the Middle East is likely to be much higher than 5,000-6,000.

Rose-Colored Glasses Off: ISIL Kills European Jihadists - Escaped Prisoner
So far, the EU authorities are desperately trying to identify the root causes of the problem. A survey conducted by British researchers indicated that many of Europe's potential fighters are guided by "a desire for adventure, boredom, dissatisfaction with their situation in life or a lack of prospects."

The EU has recently been boosting cooperation between security services and court systems of its member states. They are monitoring and collecting information about potential extremists and their journeys abroad. However, more intelligence sharing is currently required, underscored EU Justice Commissioner Vera Jouriva.