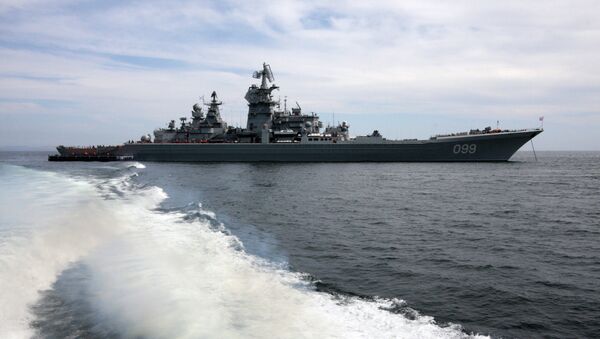 © Sputnik / Vitaliy Ankov
/
Go to the photo bank
Subscribe
Head of the Russia’s Northern Fleet press service has denied it is holding or is planning to hold any naval exercises in the English Channel, but will pass through the waterway on its course to the North Atlantic to hold drills.

Russian Divers to Hold Nuclear Submarine Rescue Drills in Northern Fleet
MOSCOW (Sputnik) – Russia’s Northern Fleet has denied it is holding or is planning to hold any naval exercises in the English Channel, but will pass through the waterway on its course to the North Atlantic to hold drills, the head of the Northern Fleet’s press service told RIA Novosti on Tuesday.

“We’re not holding anything in the English Channel. The ships are currently taking a course through the Channel, but exercises will be held later in the northern regions of the Atlantic,” Capt. 1st-Rank Vadim Serga said.

He also denied that the upcoming naval drills are affiliated with the large-scale NATO drills to the north of Scotland.

“There’s no affiliation at all,” he added.

The fleet's press service announced completing a range of anti-air and anti-ship defense exercises earlier in the day while crossing the Bay of Biscay off the western French and northern Spanish coasts. Additionally, the fleet's Ka-27 (Helix) helicopters conducted simulated rescue operations.

Late last week, the press service said the fleet's Udaloy-class destroyer, the Severmorsk, departed from the Mediterranean, where it held similar drills with the Ka-27 in December 2014.

Three Russian vessels currently in the English Channel are not engaged in naval exercises, the UK Ministry of Defense said Tuesday.

"In response to news reports, MOD can confirm 3 Russian ships being monitored by @RoyalNavy HMS Argyll through Channel. No exercises seen," the ministry said on Twitter.

According to the ministry, Russian Udaloy-class destroyer Severomorsk is returning from the Mediterranean with a tanker and a support ship.