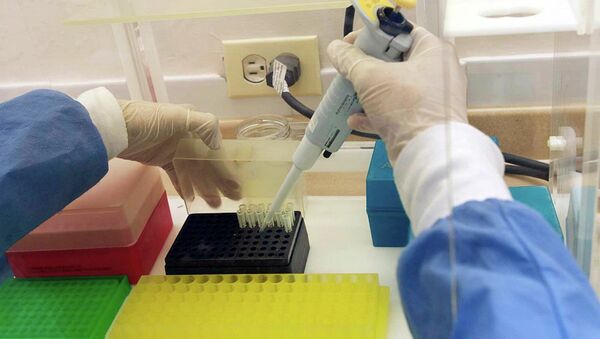 © Flickr / WHO
Subscribe
Israeli scientists have discovered two proteins that they claim can contain cancer and control the cells’ growth and development.

US Study Concludes Marijuana Can Kill Cancer Cells
A team of Israeli researchers headed by Professor Aaron Ciechanover, an Israeli Nobel Prize winner in chemistry, has discovered two proteins that they say can suppress cancer and control the cells’ growth and development, media reports said.

The relevant study was carried out at Professor Ciechanover’s Haifa Laboratory earlier this month.

Despite the discovery, Ciechanover admitted that suppressing cancer tumors is a formidable task that is unlikely to be resolved in the near future.

He said that more research is needed "to establish the research and gain a solid understanding of the mechanisms behind the suppression of the tumors. The development of a drug based on this discovery is a possibility, although not a certainty, and the road to such a drug is long and far from simple."

In particular, the study detailed how a high concentration of proteins called KPC1 and p50 in the tissue are able to protect it from cancerous tumors.

Additionally, the research shed light on the role of the ubiquitin system in the above-mentioned process. The ubiquitin system is responsible for degrading and recycling damaged proteins that can harm to cells and tissues; it was co-discovered earlier by Ciechanover, for which he won the 2004 Nobel Prize in Chemistry.