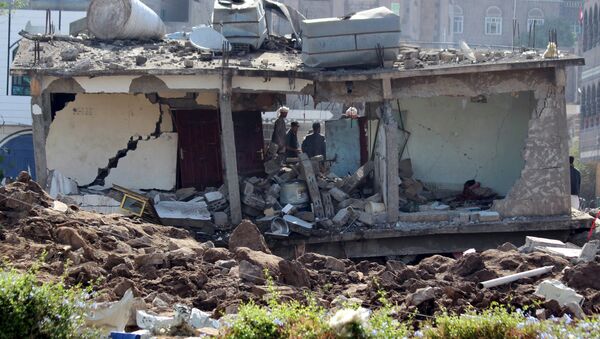 © REUTERS / Stringer
Subscribe
International
India
Africa
A top Iranian diplomat has condemned Saudi Arabia’s military campaign against Yemen, saying its only aim is “to disintegrate and weaken” Saudi Arabia; he has recommended that the country stops counting on Washington’s help in Yemen.

Iran's Deputy Foreign Minister for Arab and African Affairs, Hossein Amir-Abdollahian, has said that the ongoing war in Yemen is, in fact, a plot against Saudi Arabia.

"The enemies of the [Middle East] region are unfortunately trying to disintegrate and weaken Saudi Arabia, and the aggression against Yemen and its consequences are the start point of this ominous plot," the Iranian news agency PressTV quoted the top official as saying on Sunday.

How Iran's Rise Could Mean the End of Oil Kingdoms
Amir-Abdollahian recommended that Riyadh "stop counting on Washington's help in Yemen" and accused the US of pursuing dual policies in the Middle East.

The Iranian diplomat urged for an immediate stop to Saudi Arabian airstrikes against Sana’a, stressing that a national dialogue and the delivery of humanitarian aid to the country are the only solution to the ongoing conflict.

The continuation of Saudi aggression would lead to “inevitable consequences", he warned.

Earlier on Monday, Russia's Security Council Secretary Nikolai Patrushev warned that the military operation in Yemen may result in a serious conflict: between the Arab countries and Iran.

"More and more states are embroiled in the conflict, including Bahrain, Qatar, Kuwait, the United Arab Emirates (UAE), Saudi Arabia, Egypt, Jordan, Morocco, Pakistan and Sudan. The situation might grow into a widespread confrontation between the Sunnis and Shiites, and later [escalate] into a sharper conflict between Arab countries and Iran," Patrushev told the newspaper Izvestia.

In late March, Saudi Arabia, alongside several other Arab states, including Egypt, Jordan and the United Arab Emirates, began carrying out airstrikes against the positions of Houthis in Yemen, following a request from President Abd Rabbuh Mansur Hadi, who has been forced to flee the country.

According to UN estimates, around 600 people have been killed and 2,000 wounded in ongoing fighting since the start of the conflict.

PressTV, however, says that according to sources close to the Ansarullah movement, at least 1,000 people, including 200 children, have been killed in Yemen since the beginning of Saudi aggression.