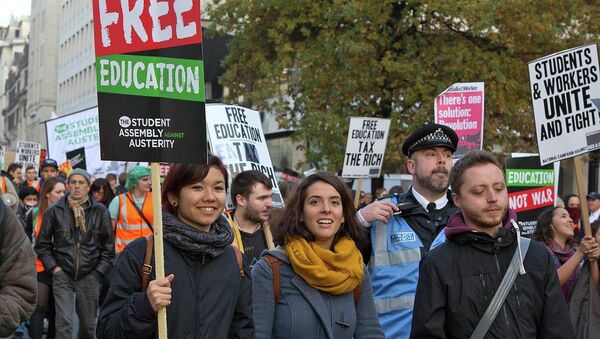 Looking to study in the UK and fancy a degree in David Beckham studies? Or perhaps a qualification in surfing? And it's no laughing matter that you can get a degree in comedic studies at Southampton Solent University too if you want.

But funding for university research is a serious business when it comes to the more serious subjects and vice chancellors from Britain's top universities are in Brussels to try and stop the European Union from cutting their research funds.

The EU is proposing to transfer $2.84 billion (2.7 billion euros) of the money previously put in a pot for research called Horizon 2020 into the European Strategic Investment Fund.

The European Commission says it is "a major step toward job creation and growth in the European economy."

Horizon 2020 was launched in 2014 and allocates funding for research worth 80 billion euros until the end of 2020. Universities and research institutes in Britain were hoping to receive $2.92 billion over the next two years. But this could all change if the EU decide to divert that money.

And to convince them otherwise, more than 50 vice chancellors, led by Professor Sir Steve Smith from Exeter University are in Brussels to lobby EU policy makers over the threat to this source of income.

"It is of fundamental importance that long-term and reliable EU research funding is protected and prioritized."

The cost of going to university in the UK is never far from the media spotlight following tuition fee increases for students living in the UK as well as international students.

Tuition fees were introduced in 1997 and capped at $4,378. In 2012, direct funding for the universities from the British government was cut and fees were increased to $13,136 a year. And that's even for courses in David Beckham studies and surfing degrees.

Just in case you missed it, Labour are planning to nick your pension so some spotty illiterate can get a degree in David Beckham studies

The average cost for an international student to study in the UK is $17,860. Top universities in London can charge overseas students as much as $51,850 to study for a degree which usually takes three years to complete.