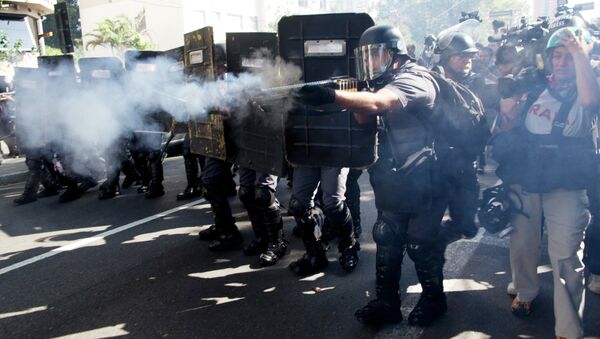 © AP Photo / Rodrigo Abd
Subscribe
International
India
Africa
Police forces and prison official around the world routinely use "less-lethal" weapons and equipment for torture,according to the joint statement of Amnesty International and the Omega Research Foundation.

Amnesty International and the Omega Research Foundation made the statement as they launched a briefing at the United Nations Crime Congress, underway in Doha, Qatar.

The advocacy groups recommended the application of stricter controls or bans on the use of weapons and other law enforcement equipment professionally defined as "less lethal" due to the high risks involved.

Trust Me I'm a Police Officer: More Than Half of US Citizens Say No!
"Police forces and prison officials have at their disposal a dizzying array of weapons and kit that, while known as 'less-lethal', can cause serious injury or even death," Marek Marczynski, Head of Military, Security and Police at Amnesty International said, as quoted in the statement.

He added that in dozens of countries around the world, Amnesty International has documented police use of tear gas, rubber bullets and electric shock equipment, among many other dangerous devices, to quell protests and subjugate detainees.

"Clearer standards are urgently needed for the selection, testing, use and evaluation of such equipment to ensure its use is in line with international human rights law and standards," the human rights group official said.

Amnesty International and Omega stressed the importance of developing less-lethal weapons, equipment and technologies, to reduce the risk of death or injury inherent in police use of firearms and other weapons.