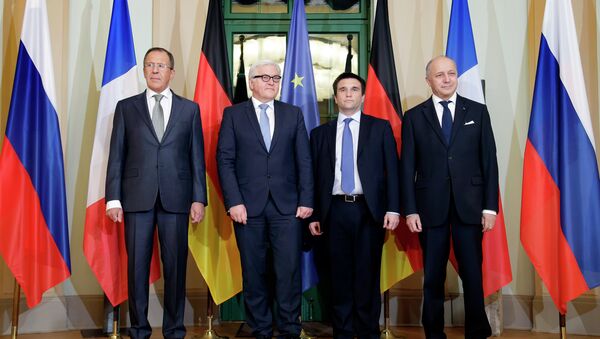 As Russian, French, German and Ukrainian foreign ministers meet in Berlin on Monday evening to discuss the Minsk ceasefire agreement, they will be aware that the suspension of EU-Russian sanctions depends on its implementation but that the sanctions face uncertainty.

European Council President Donald Tusk has linked the EU-Russian sanctions, which are due to be voted on again in June, to this agreement. Tusk is working with German Chancellor Angela Merkel and French President Francois Hollande on a compromise proposal on the future of EU sanctions that he believes all 28 EU leaders would support.

Linking sanctions to full implementation of Minsk would effectively mean extending them at least until the end of the year, because the Minsk accord contains a year-end deadline for Ukraine to recover full control over its border.

Schulz warns #Greece to stick to EU's line on #Russia sanctions: "We demand solidarity from Greece" http://t.co/gWaz9ressn /via @Reuters

However, agreement of all EU governments is needed to renew economic sanctions on Russia expiring in July, but governments are sharply divided.

Greek Prime Minister Alexis Tsipras has threatened to derail the sanction vote, which would prove hugely damaging to the EU, as a body of states. There have already been rumblings from some countries who are unhappy with the course of action against Russia over Ukraine and Crimea.

According to analysts at global intelligence center Stratfor:

"Officials from countries including Hungary, Bulgaria and the Czech Republic expressed concern about the negative impact the sanctions would have on economic growth, while business leaders in Germany and Italy warned about sanctions hurting exports to Russia and jeopardizing jobs in their countries."

The EU division is sharply based on north-south lines. Northern states that border Russia, such as Estonia, Latvia, Lithuania and Poland take a tough stance on Russia. However, governments in Central and South-eastern Europe tend to have a different view of the situation.

Stratfor analysts say: "Countries including Hungary, the Czech Republic, Slovakia and Bulgaria are more geographically secure from Russia and do not have direct conflicts with Moscow.

These nations seek a permanent balance between their membership in the European Union and NATO and their interest in attracting Russian investment and securing cheap energy imports. This is why they have publicly criticized, but quietly supported, sanctions against Russia after lobbying to soften or delay them."

German Foreign Minister Frank-Walter Steinmeier and French Foreign Minister Laurent Fabius have a difficult task in Berlin. They worry about the economic impact of the EU-Russian sanctions on the EU and are seeking a diplomatic solution, which EC President Donald Tusk has linked to the Minsk agreement. Neither Minsk nor the sanctions vote in June are foregone conclusions.