Another Aircraft Evacuating People From Yemen Lands in Moscow Region 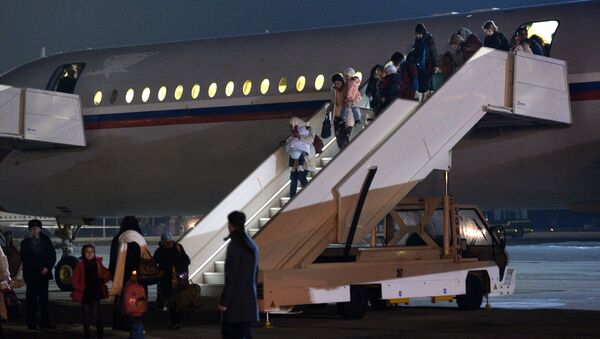 © Sputnik / Alexey Kudenko
/
Go to the photo bank
Subscribe
Another Russian aircraft with Russian and foreign citizens from Yemen has landed in the Moscow Region.

MOSCOW (Sputnik) — The second Russian aircraft bringing about 150 Russian and foreign citizens from the conflict-torn Yemen has landed at the Chkalovsky Airport in the Moscow Region, a RIA Novosti correspondent reports.

It is the seventh flight from Yemen in the last two weeks and the second one over the past 24 hours, carried out by Russian pilots.

On Sunday, Sputnik reported that two Russian planes evacuating a total of 366 people took off from the airport of Yemen's capital Sanaa heading for Moscow. The first Russian IL-62 aircraft arrived in Moscow Region earlier in the day, bringing citizens of Kyrgyzstan, Kazakhstan, Moldova, Tajikistan, Ukraine and Yemen to Russia.

US Declines Evacuation Assistance to Citizens Trapped in War-Torn Yemen
All the evacuated are due to undergo medical, passport and customs control and will be taken by bus to the Russian Foreign Ministry's evacuation center to meet with representatives of their states. Foreign citizens then will be transported to Moscow airports to fly back home.

The situation in Yemen has been tense in recent months due to violent clashes between Houthi militants and troops loyal to President Abd Rabbuh Mansur Hadi.

The escalation of hostilities prompted a number of states including Russia, China and India to start evacuating people from Yemen.