Finnish Parliamentary Candidates Do Not See Russia as Threat 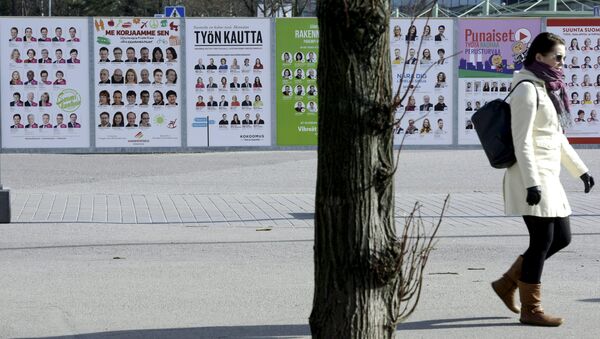 The survey results show that majority of Finnish parliamentary candidates do not see Russia as a threat to the Finns.

The majority of parliamentary candidates in Finland, do not see Russia as a threat to the security of Finland. This conclusion was reached via the result of a survey conducted by Finnish media Yle.

Entering NATO Would Pose Security Risks for Finland – Finance Minister
Out of more than 150 respondents, 70 percent believe that Finns should not be afraid of its eastern neighbor. Such a view is especially popular among the left-wing parties.

Similarly, a large number of candidates do not support anti-Russian sanctions. Comments by the candidates expressed a general opinion that the sanctions negatively impact Finland, but the Finns wanted to stand with the EU as a joint front.

Some Finns are more critical than the other parliamentary parties in relation to the EU; hence it is not surprising that many opposition candidates oppose the anti-Russian sanctions.

One candidate, Valentine Ahlavuo, notes that the sanctions have caused a lot of damage, especially to the Finnish entrepreneurs. Similarly, Markku Saarikangas believes that sanctions cause the opposite reaction, “They only aggravate the situation for both Ukraine and Europe,” says the candidate, reports Finnish media.

Almost complete unanimity was displayed amongst candidates, answering the question of how best to build Finland's relations with Russia — directly or through the EU. The response was that relations need to be constructed from both the directions.

Candidate Peter Fryukman said, “While we build our relations directly, independent of anyone, we can be sure of mutual understanding from both the sides.”