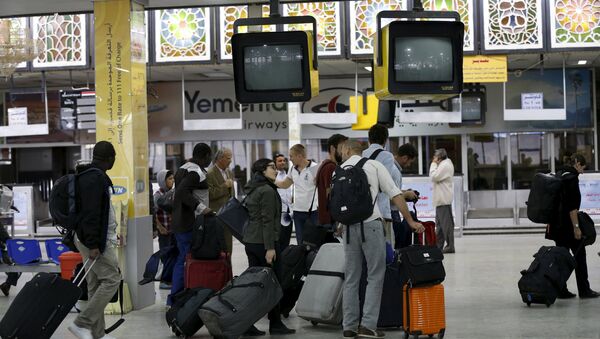 © REUTERS / Khaled Abdullah
Subscribe
The situation for Americans in Yemen has grown dire as many are finding themselves stuck in the freshly war-ravaged nation. The US appears unable or unwilling to help Americans who hope to evacuate.

An unknown number of Americans are still in Yemen where civil war broke out last month. As the body count continues to climb, many of those Americans have been left stranded by their government.

US Officials Sued for Stranding Americans in Yemen - Islamic Council
While other nations such as Russia have organized evacuation flights for their nationals, the US has simply offered advice.

"We remain in contact, through a variety of means, to advise American citizens in Yemen about the opportunities that present themselves for people who leave if they choose," State Department spokesman Jeff Rathke told reporters.

Several hundred people have been killed in just the last few weeks according to sources watching the situation such as the World Health Organization. At least one American, Jamal al Labani,  is believed to have been killed already. al Labani was hit by shrapnel while going home after a visit to his mosque.

Human rights groups have launched an initiative online to help US citizens remaining in Yemen and over 500 American have registered already, though many more are still unaccounted for. Some of those human rights organizations have even filed a lawsuit against the US government for failing to adequately assist their own nationals.

Meanwhile, several flights have been made from Moscow to help Russians leave from the Sanaa international airport. Other countries have followed, such as India which has evacuated thousands of its own citizens.