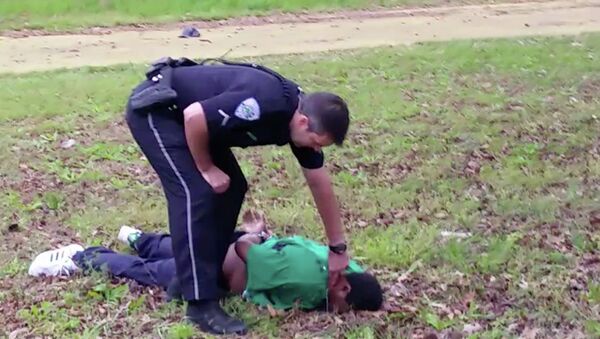 The hearse carrying the 50-year-old forklift operator was accompanied to the center by two police officers on motorcycles.

Dashcam Footage Shows Moments Before Fatal Cop Shooting of Walter Scott
During a Friday wake, his open casket was adorned with a Dallas Cowboys sign and draped with the American flag.

The three-hour public service on Saturday, which was barred from media cameras, was delayed due to people trying to cram inside the center. Among the attendees were Sen. Tim Scott as well as Representatives Jim Clyburn and Mark Stanford.

North Charleston Mayor Keith Summey and Police Chief Eddie Driggers did not attend the funeral for reportedly not wanting to cause a distraction for Scott's grieving family.

Police officer Michael Slager, 33, was fired and charged with murder following the shooting.

Slager had stopped Scott for a busted tail light when Scott ran away as Slager was checking the man's driver's license.

Scott had a family court warrant out for his arrest, and reportedly had a history of charges related to failing to pay child support. The only accusation of violence against Scott was a 1987 assault and battery charge, the details of which are not known.

Cop Slager, North Charleston PD Have Sordid History of Abuse Complaints
Slager claimed Scott had taken his stun gun during a scuffle, and that he felt threatened and that prompted him to fire his weapon. The police report states that he had fired his taser, but it was uneffective. In the video, what appears to be the stun gun fell to the ground after Scott attempted to flee, with the wires that carry the current still attached to his back.

The video then shows another officer arriving on the scene a minute later and Slager dropping what appears to be his taser next to Scott's body.

This was not the first time Slager has been accused of excessive force. In 2013, Slager was accused of using his taser on a man without reason. Slager was exonerated, but witnesses claim investigators never followed up with them. The incident took place in the middle of the night, as a man was awoken to the sound of Officer Slager banging on the door saying, “Come outside or I’ll tase you!”

Police Murder of Unarmed Black Man Provokes Protests in Charleston
The department itself also has a long history history of alleged abuse.

In one 2011 incident, Sheldon Williams claims that he was asleep at a motel in North Charleston when five officers burst through the door. After handcuffing him, the officers allegedly began taking turns stomping on the face of the unarmed African-American man. Williams’ injuries were so visibly severe that the jail officials had to turn him away and have him taken to the hospital. He did not arrive at the hospital until two hours after the beating occurred.

The hospital diagnosed him with a fractured cheekbone, a depressed fracture to the left orbital floor of his face, and a fracture on his left sinus wall. The hospital reportedly provided law enforcement with instructions to have him see a special surgeon within a week, instructions that were ignored, and Williams was never treated. Williams told media he has been in agonizing pain and to this day still has trouble sleeping and faces long-term neurological damage. The nerve damage was so severe that he claims to experience the sensation of insects crawling on his face.

No officers were ever reprimanded in that case.