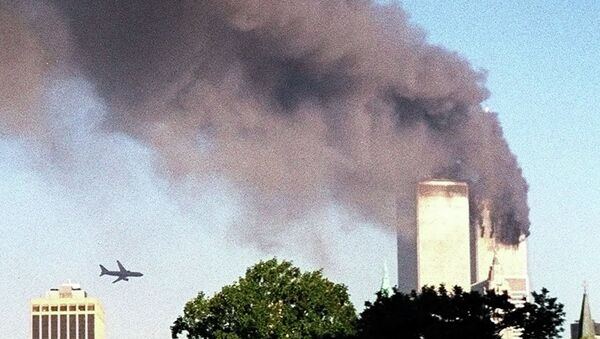 Islamic State radicals and their supporters started a Twitter campaign against Americans under the "WeWillBurnUSAgain" hashtag, saying they are going to repeat 9/11 attacks.

MOSCOW (Sputnik) – Islamic State radicals and their supporters have launched a Twitter campaign against Americans under the "WeWillBurnUSAgain" hashtag, referring to the 9/11 attacks, the SITE service, which monitors the online activity of extremist groups, warns.

"In a time of lone wolf attacks, and Americans and other Westerners pledging to the Islamic State, this kind of campaign should not be taken lightly," SITE Director Rita Katz stressed on Friday.

Do not forget your soldiers Crusaders we swore to take revenge and we fight you #سنحرق_أمريكا #WewillBurnUSAgain pic.twitter.com/xja2N3OC4X

According to SITE, about 10 Americans were indicted for attempts to act on behalf of the ISIL in recent weeks and many more are propagating the extremists' values on Twitter.

we'll take your heads off all you cross nation as this way #WewillBurnUSAgain pic.twitter.com/xMrjJOiy5q

"This Twitter campaign, along with other ones like it in the past, shows the Islamic State's skill in forcing itself into Western conversations," Katz said, adding that the "WeWillBurnUSAgain" hashtag and the content tweeted by IS "shows a unified and structured method of online mobilization by the Islamic State and its followers."

We will clean the Arab peninsular from your dirt, and will behead your soldiers by Allah's permission #سنحرق_أمريكا #WewillBurnUSAgain

The group is known for its online videos depicting the executions of foreign hostages. ISIL recruits new members from different parts of the world, including from Europe and the United States. The extremists use social networks as a tool to recruit young teenage fighters.

everyone come and fight muslims in thier country will return to his country deformed #WewillBurnUSAgain #سنحرق_أمريكا pic.twitter.com/16PCRQRbzi

According to recent estimates by US intelligence officials, some 20,000 foreign fighters including 4,000 people from Western Europe have joined ISIL in the last three years.