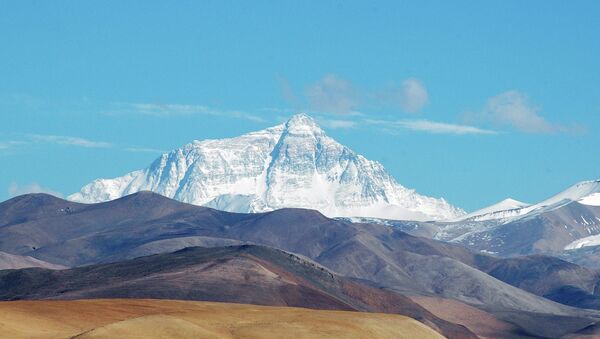 China has unveiled new plans to extend a high speed railway line to connect to Nepal via Tibet that would tunnel under Mount Everest - and creep into India's sphere of influence.

The current Qinghai-Tibet line runs from Xining, Qinghai Province, to Lhasa, the administrative capital of the Tibetan Autonomous Region (TAR). An extension has been discussed since 2008 — with a 253 kilometer stretch to Tibet's second city Xigaze completed in 2014 — but no previous plans had included a tunnel.

"A proposed extension of the Qinghai-Tibet Railway to the China-Nepal border through Tibet would boost bilateral trade and tourism as there is currently no rail line linking the two countries," the state-run newspaper China Daily reported on Thursday.

The 540-km link to Nepal would provide quick access to the Indian markets, and perhaps is an attempt to involve Nepal in the Bangladesh-China-India-Myanmar project in which India's interest has recently waned, reported the Times of India.

The line could potentially end in the Nepalese capital of Kathmandu, where Chinese foreign minister Wang Yi travelled in December, and would be completed by 2020.

"The line will probably have to go through Qomolangma so that workers may have to dig some very long tunnels," expert Wang Mengshu told China Daily, referring to Everest by its Tibetan name. He added that the "remarkable" terrain of the Himalayas would keep any trains traversing them to a speed of 120 km per hour.

China — already a close ally with Pakistan — has invested heavily in Nepal in recent years, and the rail line would be another move towards building a circle of influence around regional rival, India. In what may be a reaction to this trend, Indian Prime Minister Narendra Modi recently promised to increase spending on infrastructure projects in the region.

Tourism from within China has already increased due to the existing rail lines into Tibet.  In 2013, 7.5 million people road the railway to Lhasa, more than twice the population of the TAR.

But China is not just interested in Nepalese and Indian trade or in expanding tourism.  Mining is the really profitable goal in the region. Beijing has estimated Tibet's mineral worth to be around $100 billion.

International Campaign for Tibet has raised concerns over the proposed rail line's "dangerous implications for regional security and the fragile ecosystem of the world’s highest and largest plateau."

"The Chinese government’s claim that rail expansion on the plateau simply benefits tourism and lifts Tibetans out of poverty does not hold up to scrutiny and cannot be taken at face value," the campaign's President Matteo Mecacci said in a statement in 2014.

The railway lines across the dramatic landscape of the region are impressive feats of engineering. The Qinghai-Lhasa line boasts the world's highest rail line, highest railway station and highest railway tunnel. The extension to Xigaze required the construction of 96 tunnels.