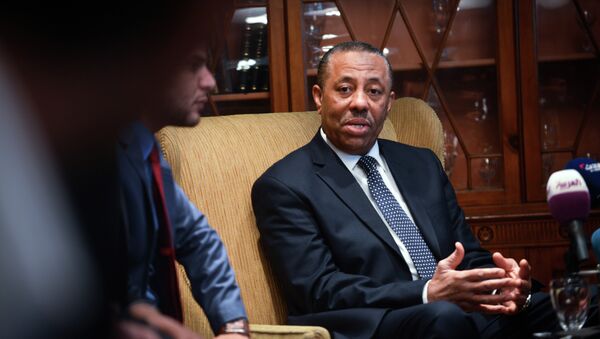 © AFP 2021 / MOHAMED EL-SHAHED
Subscribe
The details of Abdullah Thani's upcoming visit to Moscow are being agreed upon, Russia’s ambassador to Libya said.

“It [the visit] is likely to take place soon, maybe next week,” Ivan Molotkov said.

He added that details of the visit are currently being agreed upon but the agreement in principle has already been reached.

A decades-long history of cooperation, including in arms trade, defines bilateral relations between Russia and Libya. Earlier in the year, several Libyan officials stressed Moscow's importance as a permanent UN Security Council member in the country's efforts to restore rule of law.

Libya Close to Agreement on National Unity Government Formation
Several attacks claimed by the Islamic State extremist group have been reported taking place this year, with the latest suicide bombings killing at least 10 and injuring scores of others in northwest Libya this weekend.

An internationally recognized government in Libya based in Tobruk, the Council of Deputies, is currently rivaled by the self-proclaimed General National Congress, based in the capital city Tripoli.