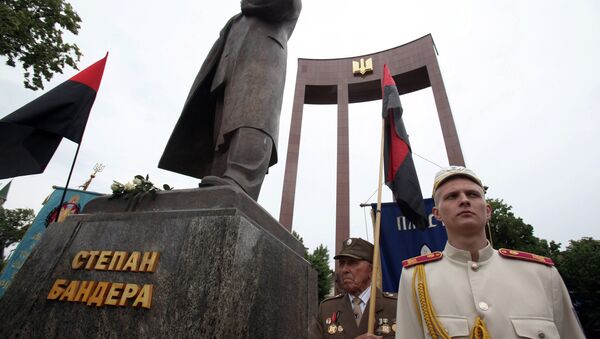 © Sputnik / Pyotr Zadorozhnyi
/
Go to the photo bank
Subscribe
The Ukrainian parliament passed a bill recognizing notorious ultranationalist groups, including those active in Ukraine during and after World War II, as fighters for the country's independence in the 20th century.

More than 270 out of 450 members of the Verkhovna Rada voted in favor of the bill. No one voted against it.

History, Repeated: Ukraine Neo-Nazis Turn to Old Ally US for 'Help'
The new law calls anyone who fought for Ukraine's independence from November 1917 until August 24, 1991, as part of formal, informal, underground, military or guerilla groups, a freedom fighter. These people are entitled to social benefits under the new law.

Organizations covered by the controversial legislation include the Ukrainian Insurgent Army (UPA) and the Organization of Ukrainian Nationalists (OUN).

These so-called freedom fighters, in reality radical right-wing groups or revolutionary ultranationalists, have a dark past. The Ukrainian Insurgent Army is a vivid example.

To see the flag of the Ukrainian Insurgent Army in London is hideous. Jews/Russians/Poles were murdered in their thousands under that flag.

War veterans and politicians have sharply criticized the glorification of the UPA and its leaders, Stepan Bandera and Roman Shukhevych, accusing them of collaborating with the Nazis.