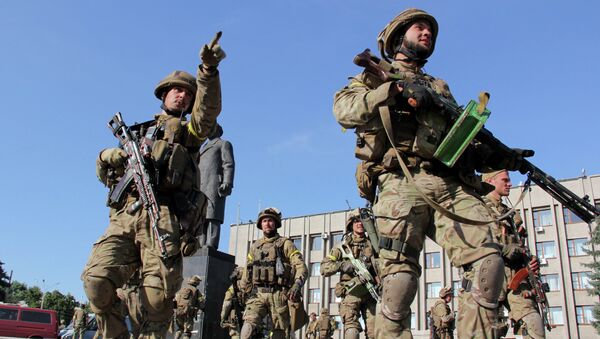 Poland to Train Ukrainian Military Instructors Under NATO Program
During a joint news conference with his Ukrainian colleague Petro Poroshenko in Kiev on Wednesday Polish President Bronislaw Komorowski said that Poland supports the deployment of UN peacekeepers in eastern Ukraine and believes that it would prevent any further escalation of the conflict in Donbas.

“This is not an easy path, because it requires a decision by the UN Security Council,” he added.

“Poland would support such a move… and we would take part in such an operation,” Komorowski said.

Petro Poroshenko, for his part, said chances of a UN peacekeeping mission being sent to Ukraine now looked better than ever.

He also said that the idea would be discussed with Russia as part of the so-called Normandy format, with the participation of Germany and France.

“[Foreign Minister Pavlo] Klimkin is in Paris now preparing such a meeting to focus on the dispatch of peacekeepers to Ukraine,” Poroshenko said.

He also said that during the Eastern Partnership summit in Riga slated for next month Warsaw would propose a visa-free regime for Ukraine.

Meanwhile, Ukrainian Foreign Minister Pavlo Klimkin said the EU had reservations about granting such a regime to Ukraine due to the ongoing conflict in Donbas.