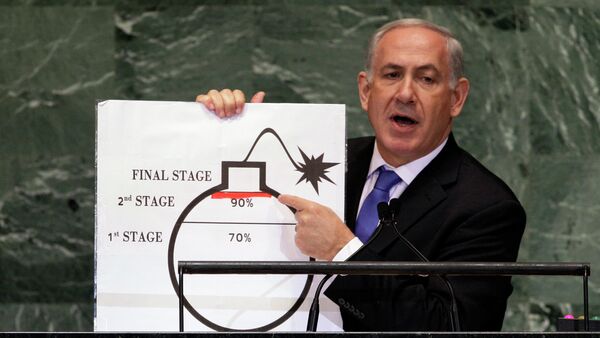 © AP Photo / Richard Drew
Subscribe
The White House mocked Benjamin Netanyahu on Wednesday by defending its nuclear deal with Iran by using a cartoon bomb that was similar to the one the Israeli Prime Minister used to illustrate false claims about Tehran’s nuclear capabilities.

The bomb diagram attached to a White House tweet looked a lot like a chart Netanyahu used during a 2012 speech to the United Nations General Assembly urging the United States and other world powers to halt Iran’s progress toward acquiring a nuclear weapon.

Using a marker, Netanyahu drew a red line at the “90%” point of the bomb to claim that Iran had almost reached its goal.

“At this late hour there is only one way to peacefully prevent Iran from getting atomic bombs,” Netanyahu told the annual gathering. “And that is by placing a clear red line on Iran’s nuclear weapons program.”

The White House’s chart is almost identical to Netanyahu’s, red line and all. At the bottom of the bomb is a blue line, representing the 0% chance Iran develops a nuclear weapon under the deal.

“Under the framework for an Iran nuclear deal,” the chart reads, “Iran uranium enrichment pathway to a weapon will be shut down.”

In three hours, the image had been retweeted nearly 700 times, with one user quipping "Apparently, the #WhiteHouse has hired #Netanyahu 's graphic design team."

Last week, US-led negotiations between major world powers and Iran came to a long-awaited framework agreement. In exchange for the lifting of sanctions, Iran agreed to limit its uranium enrichment capacity to ensure that its nuclear goals were purely peaceful.

Netanyahu has been a fierce critic of Obama’s efforts to broker a nuclear deal with Iran, even traveling to Washington to urge Congress to keep sanctions against Iran intact.

The prime minister said the preliminary deal leaves much of Iran’s nuclear infrastructure in place, presenting a threat to Israel’s security.

Obama has called the deal, which limits Iran’s ability to enrich uranium for a decade, the best chance to prevent Iran from obtaining a weapon.

Despite the landmark deal, Yuval Steinitz, Israel’s minister for strategic affairs, last week said that options for military action against Iran are still "on the table."

One month after Netanyahu made his 2012 speech to the UN, leaked documents from Israeli intelligence revealed that he lied about the state of Iran’s nuclear program in an effort to spur those in attendance into acting.

Mossad sent a top-secret cable to South Africa’s state security agency that said Iran was “not performing the activity necessary to produce weapons and doesn’t appear to be ready to enrich Uranium to the higher levels needed to the nuclear bomb.”