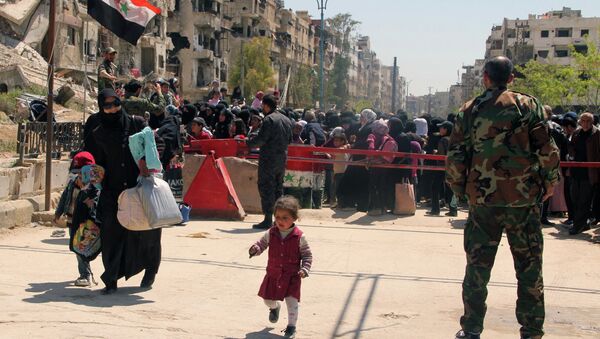 © Sputnik / Dmitriy Vinogradov
/
Go to the photo bank
Subscribe
Street fighting is going on in Yarmouk as the "Free Syrian Army" (FSA) is forced to sign a truce with the Syrian government in face of the Islamic State's unexpected advance.

The Islamic State, which previously operated in distant northeastern Syria, has unexpectedly appeared at the Yarmouk Palestinian refugee camp in a southern suburb of Damascus. Right now the district is gripped in street fighting between ISIL and the Free Syrian Army, once the main radical opposition group which is now forced to sign a truce with the Syrian government in face of a common enemy.

Civilians are fleeing Yarmouk en masse as it has become a war zone. 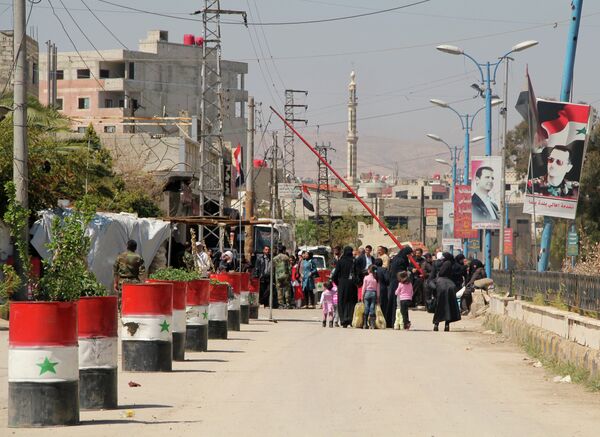 The Blighted Side of Damascus

Downtown Damascus looks like an ordinary, peaceful city — stores are open as a chaotic stream of moving cars drones on. From time to time, military aircraft fly over the city to bomb Yarmouk, the Damascus suburb. There are explosions and plumes of thick black smoke rising from Yarmouk. Residents have gotten used to this hum in their "peaceful" life, just as they got used to mortar explosions and military checkpoints everywhere they go.

To the south, closer to Yarmouk, the view outside the car window gradually changes. There are more and more army checkpoints, and soldiers manning them get more and more strict. Streets become more dirty and impoverished. This is the blighted suburb of Damascus. 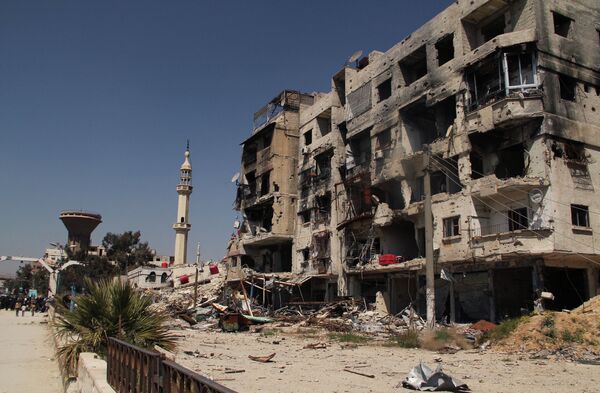 At one time Yarmouk was a Palestinian refugee camp composed primarily of tents. It appeared in the late 1940s, after the creation of Israel. As decades passed, ordinary multi-story buildings, mosques and stores sprouted up. Now it's a full-fledged neighborhood. Its residents go to Damascus for work and studies. The Syian government tries to integrate the residents into society. For example, there is a quota which states that every tenth civil servant must be a Palestinian. There are similar quotas for universities.

It is here, in the poorer neighborhoods, that extremist ideas are much more popular than in the modern Damascus downtown. The army and police prefer to not go into its dirty back streets, but the Islamist underground feels right at home. It is here that the headquarters of the "Free Syrian Army" is located. Most recently, it had no time to fight the Syrian government, ISIL militants have shown up in Yarmouk and the FSA suddenly began to see positive aspects in the Syrian state. 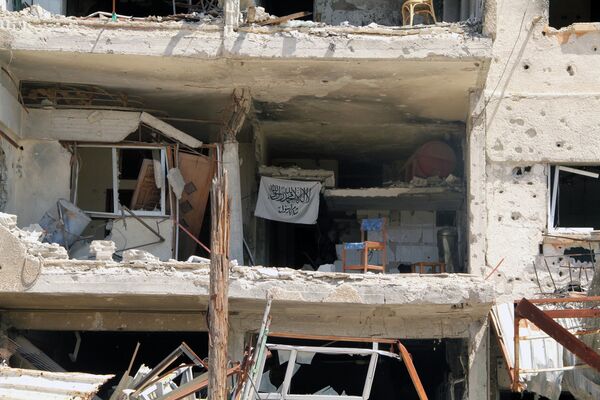 No one can really say where the Islamic State came from. Its closest positions are approximately 150-200 kilometers east of Damascus, on the outskirts of Hama and Homs provinces. It appears that they infiltrated Yarmouk in separate subversive groups, possibly from adjacent territories.

After that, local residents say, the most unpleasant thing happened. Units of Jabhat al-Nusra and the members of the Palestinian Hamas movement changed their allegiance to ISIL.

"Now they betrayed us and went over to ISIL's side," one officer at a checkpoint said of the Hamas members. 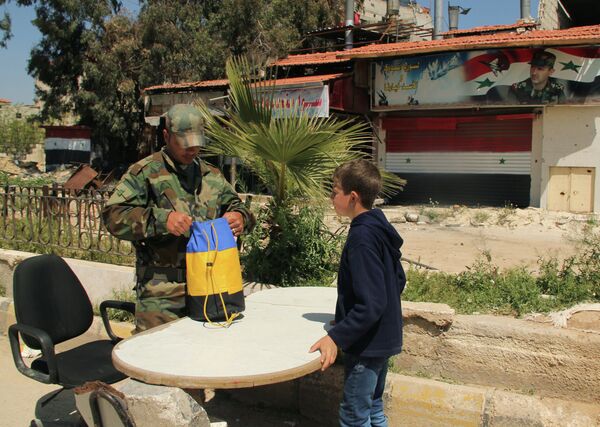 There is a truce between the Syrian government and the FSA that has been in force for the past few months. The government announced an amnesty for militants who surrender. The country has a "National Reconciliation Program" in force. Any militant can put down his weapon and avoid punishment if his participation in executions of civilians is not proven. According to Talal Barazi, the governor of Homs province, which was once home to the most hardened fighting, of the 2000 militants who agreed to the truce, only 17 were imprisoned. The rest returned to peaceful life.

"What ISIL is doing is unacceptable for us. We are for peace between peoples and cultures. We are for civilization and culture. They want to kill everyone except Sunnis. What they are doing is true horror and savagery," Sheikh Saleh, one of the FSA leaders who was a negotiator with the regular army said at a checkpoint. 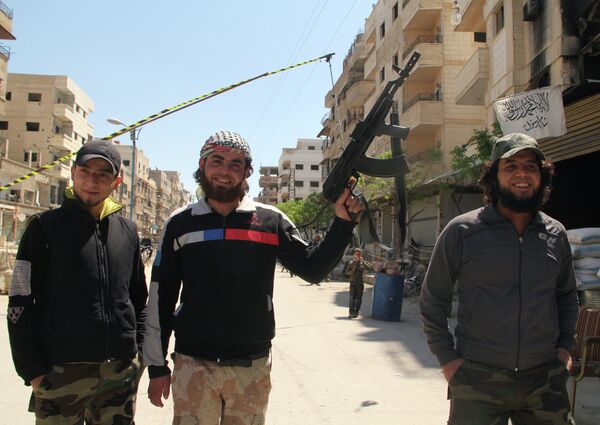 Unlike the "armed opposition," which is generally composed of Syrian citizens, foreigners set the tone in ISIL. They are jihadists who came to Syria from around the world.

"Right now there are not that many foreigners, mostly Arabs. But I think they are preparing the ground for others. Something scary is going on. It is rising from the depths of the Yarmouk camp," a fighter for the FSA who is not opposed to getting army protection said.

It was only a few months ago that these people looked at each other through the sights of a gun and talked in the language of assault rifle bursts. 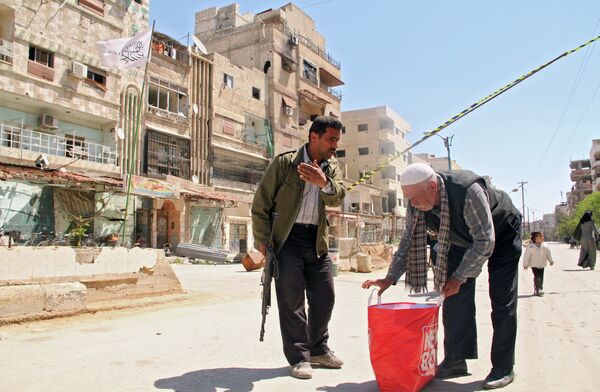 The first FSA checkpoint has young guys without weapons. The crowd of refugees surrounds Saleh.

"When will they let us through? The army checks documents for such a long time here. Why are there no buses? Why are we walking? Why won't they bring us water?" the female refugees shower Saleh with questions. Saleh tries to calm them down.

"You don't need to go anywhere, the closest refugee shelter is at the school in Babilla. Go there, all of you," Saleh says.

"We don't want to stay here! It's dangerous! ISIL will kill us!" the women scream at him. 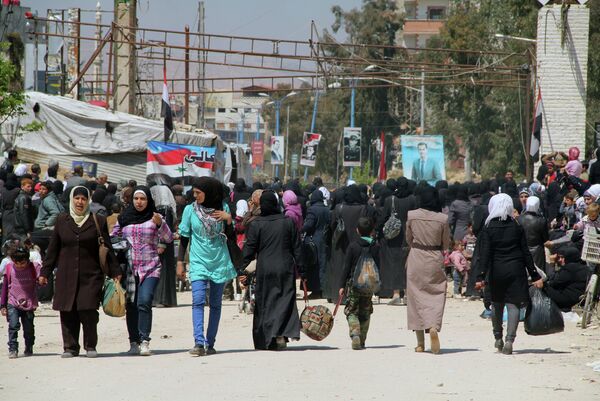 "No one thought it would be like this," one of the militants says. They say that they are not putting down their guns because now is the time to fight ISIL and defend themselves. They don't trust the army.

A car drives up to the checkpoint. It's another local leader, Sheikh Anas. He was taking one of the FSA fighters to the clinic. They still don't have hospitals of their own, which is why they go to the government for medical aid. Two government ambulances drive past the checkpoint, going to Yarmouk to evacuate wounded fighters. 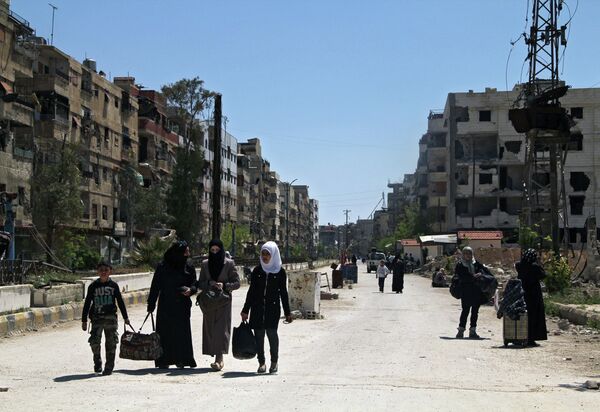 "There was a local resident rally in Yarmouk. They came out, protesting against ISIL. ISIL fighters opened fire on them from machine guns and even with mortars. 15 people were killed and 70 were injured, including our fighters who guarded the rally," Anas says. He drove one of his fighters, who was wounded with shrapnel, to the hospital.

Assault rifle bursts and explosions waft in from somewhere. FSA militants are in a firefight with ISIL.

"In the past few days we already lost 20 fighters," Anas adds.

In two hours, the line at the checkpoint did not get shorter. Refugees continue coming from the depths of the Yarmouk camp, fleeing the new "beast." 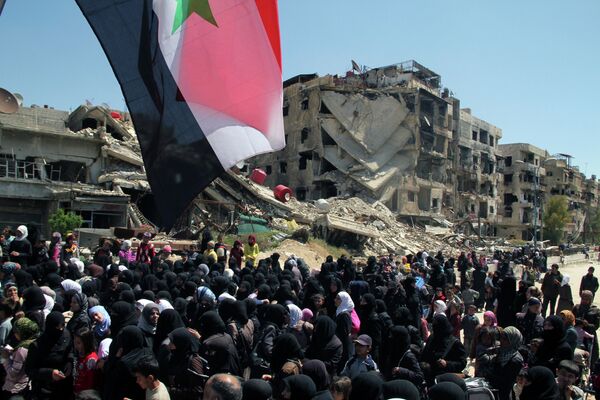 Residents flee the Palestinian refugee camp Yarmouk on the outskirts of Damascus. Clashes between Free Syrian Army fighters and ISIS militants have been going on in the district. Yarmouk residents wait in line to enter the territory controlled by the Syrian government
© Sputnik / Dmitriy Vinogradov
Newsfeed
0
New firstOld first
loader
LIVE
Заголовок открываемого материала
Access to the chat has been blocked for violating the rules . You will be able to participate again through:∞. If you do not agree with the blocking, please use the feedback form
The discussion is closed. You can participate in the discussion within 24 hours after the publication of the article.
To participate in the discussion
log in or register
loader
Chats
Заголовок открываемого материала
Worldwide
InternationalEnglishEnglishMundoEspañolSpanish
Europe
DeutschlandDeutschGermanFranceFrançaisFrenchΕλλάδαΕλληνικάGreekItaliaItalianoItalianČeská republikaČeštinaCzechPolskaPolskiPolishСрбиjаСрпскиSerbianLatvijaLatviešuLatvianLietuvaLietuviųLithuanianMoldovaMoldoveneascăMoldavianБеларусьБеларускiBelarusian
Transcaucasia
ԱրմենիաՀայերենArmenianАҧсныАҧсышәалаAbkhazХуссар ИрыстонИронауОssetianსაქართველოქართულიGeorgianAzərbaycanАzərbaycancaAzerbaijani
Middle East
Sputnik عربيArabicArabicTürkiyeTürkçeTurkishSputnik ایرانPersianPersianSputnik افغانستانDariDari
Central Asia
ҚазақстанҚазақ тіліKazakhКыргызстанКыргызчаKyrgyzOʻzbekistonЎзбекчаUzbekТоҷикистонТоҷикӣTajik
East & Southeast Asia
Việt NamTiếng ViệtVietnamese日本日本語Japanese中国中文Chinese
South America
BrasilPortuguêsPortuguese